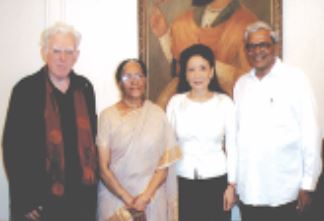 My radio participation was very brief but I still remember that experience. My first entry was to conduct a quiz program for a group of high school students.

When I was working in the college Mr.Veluri Sahajananda, then the programme director asked me to introduce some foreign writers to our Telugu Listeners. He was a nice gentleman who deserved people’s respect. I gave talks, on –Franz Kafka,- who wrote in German, Albert Camus- the French writer, Aleksandr Isayevich Solzhenitsyn the Russian novelist, and Boris Pasternak, another Russian writer. I am very happy to say that senior journalist Mr. M. Chalapathi Rao happened to hear them and reviewed them giving me some useful suggestions.

Mr. Sahajananda entrusted me with some rural programs. They were short, five- minute talks, basically suggestions to small farmers regarding modern farming techniques. Though I came from an agricultural family, I was not confident about my assignment.

So I prepared my talks in advance and took Mr. Sahajananda’s approval before I actually delivered them. Thanks to Mr. Sahajananda, I could do my work satisfactorily.

I joined Ms.Malladi Subbamma along with lawyer Lakshmi Devi and Avula Manjulatha in a discussion about the condition of women in our society and how laws help our women in dire circumstances. I was not very happy with my role in this program. I was a part of one or two discussions about our college education and the problems we teachers face while on duty.

And that was the end of my association with All India Radio, Hyderabad.

My lazy attempt to put down my ideas,- what I believe in and what I talk about with all enthusiasm, – was a failure.

Innaiah encouraged me to pen my views — he heard me talking emotionally, – but, somehow, I did all talking but wrote nothing.

My first attempt in Telugu was a small collection of articles called-Nutan Vanita’ (New Woman). Innaiah got it printed in a slim book though I don’t even have a copy of it now.

Recently I was going through an old letter written to Innaiah by Mr. Sanjeev Dev Suryadevara – a philosopher, writer, painter and a man of many more attributes. He wrote that he got a copy of Nutana Vanita and had gone through it, and he appreciated my ideas and encouraged me to write. I thank him, posthumously, for his kind words.

I attempted some translations. The first one was – Memoirs of a Cat by M.N.Roy. I hope that the spirit of the book is reflected in my Telugu translation. I  actually credit myself for attempting the translation of the work of  such a great leader, philosopher and a writer of many books which are relevant even today.

I also translated into Telugu ‘Shodh’- a novel by the Bengali writer and a revolutionary  Tasleema Nasreen.

It was serialized in Navya – Andhra Jyothi weekly by its editor Sri SriRamana,  himself  a  noted writer in Telugu. I sought his advice in naming my translation and he appropriately suggested ‘Chelluku Chellu’and I am grateful to him for naming it and publishing it.

Once Raju’s childhood friend Ashok Atluri asked me whether I would like to translate ‘Wild Swans’ by Jung Chang, a Chinese writer. He gave me the book to go through. I said I would translate it into Telugu, and in a month’s time I did that.

The book is about social and political aspects of Mao’s China. I felt like I could really understand the Chinese life those days. Chang and her husband  John Haliday- a historian, are Ashok’s  friends from London. Thanks to Ashok, the translation got printed in Kala Jyothi Press. He invited Ms. Chang and her husband to Hyderabad when they were visiting India for the first time. He arranged a meeting in Kakateeya Hotel with the help of  Mineni Lakshmi the owner of ‘Akshara’ Book House. I was very happy to meet Ms.Chang and her husband.

I also met Ms.Tasleema Nasreen in Maryland University where she was addressing some students.

After that I read her books the-English translations, and then sought her permission to translate  ‘Shodh’.

Innaiah arranged the book release function of-‘Chelluku Chellu’ and ‘Adavi Kachina Vennela’, the name of my translation of ‘Wild Swans’ and  Ms. Volga, a prominent writer in Telugu, was the Chief Guest. Ms. Tasleema came down from Calcutta for the release function. Mr. Nageswara Rao, the Principal of Eenadu Journalism School presided over the meeting.

While the meeting went off very well, just before we were leaving the Press Club in Hyderabad,- some religious fanatics stormed in and verbally abused Ms. Tasleema denouncing her views on ‘Islam’. With the help of police escort Ms. Tasleema was sent back safely to Calcutta but it was a real horrible experience.

I translated three books by  Ayan Hirshi Ali, a Somali writer The Caged Virgin, Infidel and Nomad. Ms. Ayan is critical about the way her religion treats women and her anguish is expressed in her writings. Like Ms. Tasleema Ms. Ayan faced the wrath of religious fanatics. She came to America from the Netherlands and settled there, continuing her writings and making, speeches. All three translations were published by Innaiah.  Innaiah along with our grandson Rohit presented Ms. Ali with my translation of The Caged Virgin at a meeting in America.

I recently translated ‘Na America Paryatana (My American Journey)’ by Avula Gopala Krishna Murthy into English. In 1963, he was a guest of the American government  two months. He wrote in a wonderful way what he saw in America, what he felt and what his reaction was and I found that his book is relevant even today with just some statistics that have changed.  He was an advocate, great writer and a wonderful orator. He wrote down his travel experiences for his Telugu audience. I hope I have done justice to his book,-written in beautiful language and   wonderfully   expressing his views  about social, political and educational aspects of America. If you read his book you feel that you have personally seen America.

In 2014, I wrote about My Life, My Memories. Innaiah got it published naming it ‘Jeevithame Naveenam’. I dedicated my book to my parents who bestowed me with a happy life. My grand children wanted me to write the same in English as they can’t read Telugu. I wish they will not get bored while reading this with so many personal details. This is for them to really know me,  my family and friends.