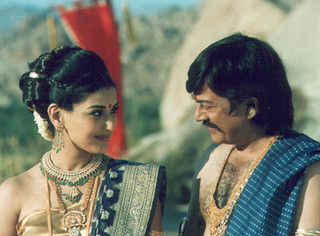 Anaahat is a film directed by Amol Palekar based a Hindi play called “Suraj ki antim kiran se Suraj ki pehli kiran tak” (from dusk to dawn) penned by Surinder Verma. Anaahat was screened as an opening film at the Indian Panorama in 2003. It was also screened at Jerusalem Film Festival in 2011.

Amol Palekar started his career in theater. His made his debut as an actor in a Marathi film “Shantata! Court Chalu Aahe”, a film made by Satyadev Dubey in 1971. His Hindi film career started with Rajnigandha in 1974. Soon he made his mark as an actor mostly known for middle path cinema with directors like Basu Chatterjee. Amol Palekar’s first film as a director is a Marathi film called Aakreit. He made films in both Marathi and Hindi. His films have won five national awards.

Surendra Verma is well known playwright in the Hindi language. He wrote several plays and three novels. Suraj ki antim kiran se Suraj ki pehli kiran tak is his most famous play. This play was directed on stage by Amol Palekar in 1972. I suppose one could expect that he would make a film as well.

The film is set in the 10th century AD in a city called Shravasti in a kingdom called Malla. The film opens to ministers talking about Niyoga. King of Malla is a classical vocalist. He is training with a teacher, but not able to concentrate on his music. The king is impotent so he cannot have any children. He has a very good relationship with his wife in spite of his problem. The governing council decides that the queen Sheelavathi should select a man to perform niyoga to have a child. She is supposed to do it that night. Both the king and the the queen are reluctant and sad to do this. They think it is forced upon them. Sheelavathi is supposed to spend dusk until dawn with a person she selects. She comes back as a new person realizing what she is missing. She does not mind expressing her opinion. How people react to this makes the rest of the story.

The film deals with two things. One of them is how a person feels about his lack of masculinity. The king is hurt that her wife is asked (in a way forced) to have sex with someone else, because he is inadequate. The kingdom needs a heir, there is not much he can do about it. He also has an underlying fear that he could lose his wife.

Another thing the film deals with is female sexuality. Sheelavathi loves her husband in spite of an unconsummated relationship. She was never asked if she wants to participate in niyoga. Her husband doesn’t see or talk to her for the week before the event. Mahattarike is the one who acts as a bridge between the couple. After the night of niyoga, the ministers and the king were expecting to see a victim. But Sheelavathi does not think she is a victim as she is ecstatic about her experience. People’s attitude towards her is completely changed.

The film has interesting characters. The king who loves his wife, but cannot consummate his relationship with her, the queen who does not know what she is missing in her life. The king does not express his feelings. He mostly keeps them to himself. Mahatterike is his closest confidant. The queen on the other hand is outspoken. She is not afraid to speak her mind. Mahatterike is an observer and a voice of reason in the film.

The film though it is says inspired by the play, it is true to the plot. There are some minor differences, but they are not important to the plot.

Anant Nag is excellent actor. He portrayed the complex character of King very well. Deepti Naval is as good as Mahatterike as ever. One revelation is Sonali Bendre. She is one of the most beautiful actresses, but this film proved that she could act. The other people in the film are very good as well.

Camera work by Debu Deodhar is fantastic! The film is gorgeously shot and very colorful. The film is literally beautiful! It was shot in the fort of Hampi which is exquisite! Hampi is on my to visit places in India.

Directing work by Amol Palekar is excellent! This film is about sex and sexuality without being salacious. While the credit for that goes to the playwright Surendra Verma, Amol Palekar dealt with a subject in very matured way. Palekar also dealt with issues of transgender in Dayraa and sexual abuse in Kairee before this film. Too bad he is not making films anymore.

Music also conceived by Amol Palekar is fabulous! It is a character in itself!

Costumes by Sandhya Gokhale are excellent! She has done her research.

Watch this film for this is one of the rare films that explores of impotency and female sexuality. It is also Gorgeous!