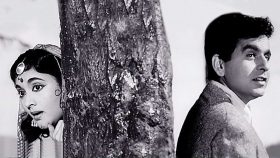 Dilip Kumar was one of the most influential actors of the Hindi film industry. His acting style influenced later super stars like Amitabh Bachan and Shahrukh Khan. He passed away on July 7th, 2021.

Madhumati is a film made by Bimal Roy and written by Ritwik Ghatak. The film was a huge hit and won a few Filmfare awards (given to commercial films) and also the National Award for the best Hindi feature film. It was also India’s entry for the Oscars in the best foreign film category. This is a regular commercial film made in the classic Bollywood era.

This film is my tribute to one of the greatest super stars and the first method actor of Hindi film industry, Dilip Kumar. Dilip Kumar was born as Mohammad Yusuf Khan in Peshawar in present day Pakistan. He made his debut in the film Jwar Bhata in 1944. He was given his stage name Dilip Kumar by Devika Rani who ran Bombay Talkies. His first box office success was the film Jugnu. He went on acting in various films had a hugely successful career spanning over 50 years. His final film was Qila which released in 1998. He won several awards including Dada Saheb Phalke award given to the contribution in Indian film industry and Nishan-e-imtiaz the highest civil honor given by the government of Pakistan.

Bimal Roy started his career as a publicity photographer for the film Devdas in 1935. He is known for realistic films. He is one the most important directors in the history of Hindi films. His films have tackled various subjects including farmer’s debt in Do Bhiga Zameen, and caste in the film Sujata. My favorite of his films are Do Bhiga Zameen and Bandini.

This film is based on a story written by Ritwik Ghatak. He narrated the story to Bimal Roy, who loved it and decided to adapt it. Ghatak also wrote the screenplay for this film. Madhumati is Ritwik Ghatak’s only commercially successful film. Well known writer Rajinder Singh Bedi wrote the dialog for this film.

The film opens with Devinder driving with his friend on a stormy night to pick his wife up from the train station.  Their car gets stuck due to a landslide. To escape the rain they go to a nearby mansion. Devinder is familiar with this place even though he had never been there before. He also sees a painting he painted before, but doesn’t know when. It slowly comes back to him. In his previous birth he was called Anand. He worked as an estate manager of a timber firm. This mansion belongs to Ugranarayan who is the owner of the timber firm. Devinder narrates the story of his previous birth to his friend.

This film is part noir, part gothic, and a reincarnation love story. This is the one of the first films to deal with the theme of reincarnation which was done to death later.

The film is more or less completely centered on the love story of Anand and Madhumati. We learn little about Anand’s background. He loves Madhumati and is obsessed with her. Madhumati is also madly in love with him. She promises to be with him even after death. As with any other commercial film we really don’t learn what makes them tick together except that they are both very nice people.

Dilip Kumar was called tragedy king because he gained his fame by playing tragic roles. Some  part of this film is tragic as well, but it is mostly romance. Dilip Kumar had screen presence like no other actor in Bollywood. He knows how to steal the show and that’s what he does.

Vyjayanthimala who played Madhumati is beautiful. Her chemistry with Dilip Kumar is really good! One actor I must talk about though is Pran. Pran played villainous roles most of his young life. He was a fantastic actor and is excellent as Ugranarayan!  His final scene in the film is great because of his acting.

I love Bimal Roy’s work. The classic era was classic partly because of him. The direction is as good as usual. I have to mention Ghatak’s screenplay here. It is very very good! The film is very modern and the credit goes to Ghatak for this. I am a Ghatak fangirl, I would have liked the screenplay even if I weren’t one.

Editing work by Hrishikesh Mukherjee is very good! Not many scenes are wasted. This is a commercial film so there are some unrelated scenes just to lighten the moments.

Salil Chowdhury is one of the best composers to work in Hindi film industries. Music of this film is very good. Songs were super hit. Background score is fantastic!

Watch this film made by two geniuses working together. Also for the majestic Dilip Kumar.