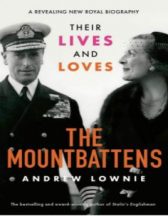 THE MOUNTBATTENS – THEIR LIVES AND LOVES by ANDREW LOWNIE

THE MOUNTBATTENS – THEIR LIVES AND LOVES is a biography of the royal couple Edwina and Louis Mountbatten, written by Andrew Lownie. After an intense research on the life and relationship of this powerful couple Andrew Lownie brings out a lot of things related to their personal and professional life. Dickie Mountbatten who was a great grandson and godson of Queen Victoria, Edwina who was named after Edward VII her godfather, the richest man in the world were married on July 18, 1922. It was a grand wedding of the century. A short film was also released on that occasion with huge media coverage. They lived the most controversial life and it was the most talked about couple both due to their involvement in the British political life and also due to their controversial personal life.  After their deaths,  their individual lives were  recorded separately, but in this book Lownie brings out the relationship between these two glamorous individuals and speaks at length about their association and their personal equations while representing the mighty British empire.

Dickie had his own flirtations before his marriage and they did not end with the marital bliss. Both Edwina and Dickie lead independent lives and had their own relationships with people who came into their lives. With two daughters Patricia and Pamela to cherish the couple was also busy with their multiple affairs with both sexes on either side. At One time Dickie also commented “Edwina and I spent all our married lives getting into other people’s beds”. Edwina’s infidelity started just three years after their marriage when she met Hugh Molyneux. And then it continued with Stephen “laddie” Sanford, Mike Wardell, Ronald Colman, Larry Gray and Ted Phillips. The press of those times always commented that she had a strong attraction towards Asians and colored people. She was photographed with these lovers several times. Dickie was hurt and this also brought guilt into Edwina but she just could not stop herself from getting attracted to others. Her relationships with Jawaharlal Nehru and the passionate letters they wrote to each other are discussed even today. It is said that she was deeply involved with Nehru and the day she died in her sleep due to her neglected  illness, she had Nehru’s letters around her in her bed. There were several rumors and accusations regarding her associations. Marjorie Hall Simpson, publicly accused Edwina for frequently committing adultery with her husband Henry Anthony Simpson. Under these circumstances both Dickie and Edwina came to an arrangement. It was decided that Edwina would support Mountbatten in his career and he would remain understanding towards her other relationships as long as they are maintained discreetly. They decided to stay together but in an open marriage. But still many magazines at those times spoke about Edwina and her affairs. She was also linked with Bobby Sweeney and Leslie Hutchinson.

Dickie or Louis Mountbatten also had his fling of affairs. His relationship with Yola Letellier who was already married to Henri Letellier a French media man was the talk of the town. She remained his mistress until his death. People talked a lot about his sexuality. His association with friends in the Navy was widely discussed. He was close to Noel Coward, Tom Driberg who were recognized as Homo sexual. There were several claims and complaints regarding to Louis homosexual affairs. The media of those times ranked him a Bi sexual. There was a house he regularly visited where homosexuality was practiced and during his Naval career, he was mostly found with people who practiced homosexuality and his attraction towards young men was evident.

Along with their personal life this book also speaks about their professional life. The World War II influenced them in its own way. Louis took command of HMS Kelly and Edwina temporarily put her lavish life style aside and took to charitable work. In July 1942, Edwina was appointed as Superintendent in Chief of the Nursing Division, the highest post of that time. At that time Louis rose to the post of Supreme Allied Commander of Allied Forces in South East Asia. And then came to him the post of 45th Viceroy of India. And he was given the task of transferring the power to the Indians thus becoming the last Viceroy of British India.

Edwina and Louis met Jawaharlal Nehru before in an official meeting in Singapore. Edwina was instantly attracted to Nehru and it was evident. When the couple visited India with Louis as the last Viceroy of British India, her rapport with Nehru became intimate. When the couple enjoyed a close association with Nehru, Mountbatten failed to get connected with Jinnah and was unable to convince him about the importance of undivided India. After Jinnah’s death on 11th September with cancer he also commented that if he had known the seriousness of his illness, he might have delayed independence and there may have been no partition.

Nehru and Edwina became soul mates and their trust on each other grew. Edwina’s younger daughter also confessed that in Nehru her mother found the companion ship and equality of spirit and intellect that she craved.” Edwina always waited for an opportunity to be with Nehru. By that time Edwina and Louis were having a hard time in marriage and this relationship came as a relief to Louis because he found that with her association with Nehru, Edwina was much calmer and the late night fights they both were having stopped and Edwina was more cheerful and happy. This relationship continued through letters even when Edwina had to return to England. Both Nehru and Edwina wrote to each other and were in touch. They also met when time permitted crossing the boundaries and keeping the press away.

But on the other hand Nehru was deeply attractive to women and had many lovers including the politician Padmaja Naidu, who threatened to commit suicide over the affair and whom he later appointed Governor of West Bengal, The actress Devika rani and Mridula Sarabhai, the General secretary of the Congress Working Committee were also in his list of lovers. In May 1949, he supposedly fathered a son with a scholar of Indian scripture and mythology, in her early thirties called Sharda Mata. The boy was brought up in a Christian Missionary boarding school.. During such circumstances the relationship between Edwina and Nehru was a seriously discussed subject. According to S S Pirzada, a former Foreign Minister of Pakistan, Jinnah was given several letters between Nehru and Edwina that had been intercepted. One said. “Dickie will be out tonight, come after 10 O clock. Another, “I have fond memories of Simla – riding and your touch” Jinnah returned the letters saying he had no wish to capitalize on them.

Nehru’s biographer Stanley Wolpert writes of seeing Nehru and Edwina at the opening of New Delhi’s academy of fine arts. “And how like adolescent lovers he and Edwina behaved, touching, whispering into each other’s ears, laughing, holding hands. Edwina used to call him Jawaha and this closeness was the reason why Nehru’s daughter Indira hated her.

In public Mountbatten’s were an attractive couple,  in reality both were always running away from each other. But professionally Louis always had the cooperation of the Lady and he in fact enjoyed it. Edwina was magnanimous to comment on Louis girlfriends too. She  encouraged him writing “Your girl is sweet and I like her” This book was boldly written, much of the relationships may be termed as gossip but the writer has a lot of archives which openly discuss about the relationships of the couple. Their personal letters also were mentioned several times and the book also has a lot of photographs of Edwina and her lovers separately which explains that these affairs were never private.

In India when Mountbatten was busy with work, Edwina was writing to Nehru “I hated seeing you drive away this morning…. You have left me with a strange sense of peace..Perhaps I have brought you the same?  Nehru the future prime Minister of India writes to her “Life is a dreary business, and when a bright patch comes it rather takes one’s breath away” In another letter she writes “You have brought me, all I was yearning for.” In one letter Mountbatten who demanded his privacy with his then girl friend wrote to the complaining Edwina “Just as you wept with disappointment when…I was going to be home the first evening that you and Jawahar were going to be together, I sometimes also feel I’d like to be alone with Yola.” In spite of these affairs the couple had mutual admiration towards each other. And some of their personal letters express this.  Mountbatten had a very close relationship with his daughters. In fact he was more the wanted parent to the girls. Edwina one way was saddened by this and also took it as a relief with her frivolous life style.

Moutbatten was also talked about his affair with his god daughter Sacha Abercorn. Some versions also said that Edwina’s relationship with Nehru was impossible, first because it was platonic and then because he was impotent. According to Pamela Hicks, her mother had at least eighteen lovers but her father to her knowledge only had one other.

This book also has a letter by the Federal Bureau of Investigation which speaks about the extra marital relationships of this couple. There are a few discussions where Mountbatten was blamed for his hurried partition process in India where the boundaries were not clearly stated before Indian Independence.

Edwina died when she was 59. Louis Mountbatten continued his life of adventure till he was killed in a assassination attempt by the IRA. Along with him died his two grandsons, and his daughter’s mother in law who were with him on the boating trip.

This biography is a proof that men of fame and name may not be the idols we chose them to be and they are very much human with a lot of weaknesses and guilty stories to their credit. Louis Moutbatten was lucky. He was born in the right time, in the right place and had all the proper connections which he used the maximum for his benefit to become the man he was. His close association with Philip and his influence on the royal family was also discussed in this book.