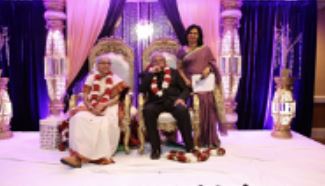 The new management of The Wall Street Journal invited Raju to New York to work with them. His past experience and accomplishments led him back there. For Raju it was like going back home. He took charge in 2012 as Managing Editor of The WSJ Digital Network and just a year later, in March 2013, moved to a business role as the Senior Vice-President, Strategy, for WSJ’s parent News Corp. Mr. Rupert Murdoch is the Chairman of News Corp.

Raju’s digital success earned him the nick name of Digital- ‘Czar at WSJ and  India Abroad  honored Raju with the ‘Man of the Year’ award in Digital Media.

Raju lives in Brooklyn with his family. Leila and Zola joined  the International School of Brookly  there. They are busy with their studies and many extracurricular activities. Raju is always busy travelling, internationally expanding the scope of his corporation. Kim, as ever is in charge of the domestic front, kids and their studies and activities. She manages everything well untiringly as Raju is away most of the time.

I sometimes worry that Raju hardly gets any rest with work and travel. But he loves to work 16 hours a day and he is used to it.

I am always surprised at his ready wit and subtle humor.

Let me digress here to quote one or two anecdotes of his wit and humor.  One evening Govind Chowdary, a friend of ours, and program Director at  Doordarshan television in Hyderabad,  visited us. He was telling that he had two segments of film music, Chitra Mala & Chitra Lahari and he was planning  a third segment of film music. He asked Raju to suggest a name for that. In a split second,  Raju said – “Uncle! Name it Chitra Himsa“ (torture through film music). Govind was full of admiration for Raju for his ready wit and, couldn’t control his laughter.

One evening I was casually telling Raju that our friend Justice A. Gangadhar Rao was bitten by a stray dog when he went on his morning walk. Raju at once asked : “How many years is it punished?” My puzzled took made him elaborate:  ‘The dog has bitten a judge. He will surely deliver the verdict to punish the culprit,   won’t he?” There are many such quick remarks by Raju on many occasions.

Raju won the Best of Cox Award at Dayton Daily News for reporting. Under his able guidance,  his staff got Pulitzer Prizes at The Washington Post. He had the honor of being on the jury Panel to select the Pulitzer Prize winner in  journalism for two years.

Indiana University, where he did his M.A. honored him with the Distinguished Alumini Award for Journalism in September 2013.

Once, in an interview, when he was asked how he could achieve so much at a very young age – his reply was: – “what I can do, you can do.” – That is how he always encouraged  youngsters to work hard and, he never intimidated them with his  pride. Isn’t that a humble way of looking at his success as a journalist? Wherever he worked, he left an indelible mark of his genius, which the younger generation looks at in awe and admiration.

Sometimes Kim says that Raju cares only about his work not about making money. Raju believes that there are other considerations more important than money. He always lives according to his convictions, no compromise what so ever.

He is an art connoisseur and a great lover of books. He has a good collection of paintings and books. Even Naveena has built up a library of her own with a large collection of books. At my ripe age, books are my friends. My children made it possible for me to read good many books of my interest.

I am  proud of our son for his success as an intellectual giant, a specially gifted and talented person. He is a self- made achiever. His depth and breadth of experience commanded personal and professional respect from others. His capacity to think, reason, explore and question, his thirst for fresh ideas and bold innovative techniques in work made him sky rocket to spectacular fame and success.

I  wish him the best of everything in his life with success at every step  in his pursuits. I love him and, adore him and  wish him a happy, healthy long life!

I began to love Innaiah after our marriage as ours was an arranged marriage. We came to know each other slowly.

Our life has been simple and happy. No luxuries but yet nothing lacking.

My life revolved around my family, my home and my job.  I am not competent in dealing with external issues. That is Innaiah’s  lookout.

He lives according to his beliefs, no compromise. He hated religious domination. He fought against superstitions and blind beliefs. He spoke against them and he wrote against them.

He arranged many meetings, organized many seminars and conferences to propagate his ideas. He invited important people who have similar beliefs to spread the scientific way of approach to life. He was not interested in taking up a regular job as that curtails his freedom in carrying out his mission. He once refused a well- paying job at the American Embassy  in  Madras because a clause in the order said  he can’t write anything to any news papers or magazines as long as he works for the embassy. With his association and connections he could have occupied higher posts but he never thought of earning money. Those connections he used to help others not for self.

He is a Rationalist and Humanist and introduced M.N.Roy a great philosopher, writer and a good human being, to Telugu readers by translating almost all his books into Telugu.

Our children grewup in a healthy atmosphere. They were never demanding. They enjoyed their freedom to make themselves good human beings – kind. Considerate, understanding and helpful. They never misused their freedom. They have become successful in their pursuits.

We could build a two bed-room house in the Journalist Colony,  Jubilee Hills, Hyderabad – within our means. I made our house a pleasant place with flower plants in the front and fruit trees in the back. When we sold our plot in the main Jubilee Hills colony, we used some of that money to build the first floor. Our house is simple and it is where we entertained all our friends and well-wishers on many occasions. We were really happy to do so.

On – 31st May 2014, our children celebrated our 50th  wedding anniversary pompously. Hemant took special interest in making arrangements and saw that the function was a grand success with 150 guests.

The special guests were – Dr. Yarlagadda Lakshmi Prasad, Prasad Thotakura (President of TANA), Ashok Atluri (Zen Technologies) and Dr. Nirmala and Dr. Usha Raju from New Jersey and Detroit respectively. Nirmala and Usha Raju were my students before my marriage. It was very kind of them that they could attend the function and speak about their experiences with this teacher of theirs.

Innaiah translated books of Sri Narla, Venkateswara Rao, Richard Dawkins, Sam Harris, Christopher Hitchens to spread secular and scientific ideas among people. That is his mission and life’s work. He is a simple person and practicses what he tells others. He expresses what he believes in. His policy is to be honest in whatever he does. Even if he has to face troubles in his way – he never changes his life style.

Earlier our 40th wedding anniversary was celebrated by Naveena and Raju in Hotel Fortune, Hyderabad with 120 guests. Syamalakka’s son Ramu helped  them to invite all the guests before both of them reached India. Similarly they celebrated Innaiah’s and my 75th birthdays with 75 guests, relatives and friends. They made all these events memorable. That is the way they express their love to us. We are very fortunate that way.