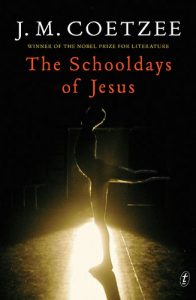 J.M. Coetzee is a writer who has used his books to explore the human ideology of life. He was awarded the Nobel prize in literature for the year 2003. He is the first author who won the Booker prize twice. He got his first booker for THE LIFE AND TIMES OF MICHAEL K in 1983 and for DISGRACE in the year 1999. THE SCHOOL DAYS OF JESUS (2016) is written as a sequel to his previous book THE CHILD HOOD OF JESUS(2013). In 2016, The School days of Jesus was long listed for the Man Booker prize.

This book starts from where “The Childhood of Jesus”  ends. We know that Simon, David and Ines unite on a boat where they are forced to move out from their lands, their pasts are erased and they decide to take care of each other when then step on the Spanish city Novilla. David is taken care of Simon and Ines is introduced as his mother. Ines and Simon are not romantically involved but they live together to take care of Simon as his mother and father. But when the authorities in Novella are trying to register the citizens, Simon decides to move away from the city as he wants to keep David with him and wants to be his father. If David is known to the authorities as a child with no biological parents, then he has to be turned to the social security system where Simon will no longer have the privilege to be David’s parent.

So all three of them move to Estrella a small town which is not very popular, and they live on a farm doing menial jobs. David is an intelligent boy and right from an young age decides his life by himself. He takes over every situation and Simon and Ines are forced to approve  his choices. He does not like formal education. A private tutor is tried but it seems futile to educate David in the formal method. Hence with the help of the landowner sisters, David is admitted into a Dance Academy.

This academy is run by a couple Ana Magdelena who is the perfect woman in action and thought and her husband Juan Sebastian. Ana has a unique way of teaching dance to her students. David is immediately attracted towards her. At home he never submits to the dominance of Ines or Simon and brushes them away declaring that they do not understand him. But to Ana Magdelena he voluntarily submits himself and allows her to decide things for him. Simon feels hurt when David chooses to be a boarder at the Academy and wishes to leave the family. But being a democratic parent who believes in talking and understanding, he agrees to the will of David. And as a dutiful parent he also keeps an eye on his security.

There is an old museum beside the Academy and Dmitri the watchman who works at the museum is a constant admirer of Ana Magdelena. He declares that he is madly in love with her to everyone. But Ana ignores him. Dmitri takes a few children into his confidence and entertains them showing the nude pictures he has been collecting for his pleasure along with his maddening passion about Ana Magdelena. One day Ana Magdalena goes missing and David along with Simon finds her dead body in a locked cupboard. Dmitri goes missing but the next day he goes to the police and agrees to his crime of raping and killing Ana Magdelena with whom he was having an affair from long.

Simon is surprised with this revelation. The court which is set in a total socialistic atmosphere wants to go the depth of the psychology of the Criminal. Though Dmitri confesses his crime the court investigates into the mental state of the patient and declares him Insane sending him to an asylum. David who always admired Dmitri understands his passion for Ana and also his aggression towards her. Dmitri wants to suffer for the crime he has done and repent, but the court sends him into the safety of an asylum. Dmitri hates this forgiveness and wants the reverse. He wants to be convicted for the crime and sent to salt fields, the dangerous part of land, where hard core criminals are sent on punishment. He tries to get away from the city with the help of ever willing Davind and unwilling Simon but he is caught again and transferred to the asylum.

Meanwhile Ines finds another mode of occupation and starts living separately from Simon. Simon becomes the dutiful father trying to understand the intellectual needs and enthusiasm of David. He is unable to understand David’s thoughts and views on life and his philosophy. The seven year old becomes his teacher and Simon learns to respect him as a different human being giving him all the required space to grow.

The Academy is closed  after Ana’s death but Juan tries to reopen it. David is unable to get an admission into the Academy of Music and goes back to the Dance Academy to be on his own. Finally we find Simon trying to understand David through his passion towards Dance and his recalling of numbers. He joins the Academy and takes help from Mercedes, Juan’s sister and Juan himself with his dance lessons.

Reading Coetzee is a different experience. His novels do not contain an elaborated story but deal with his own discussions with his philosophy and ideology towards life. There is a lot of discussion regarding ones passions and pleasures. Through the character of Ana the writer brings about the internal clash between once passion and pleasure. Why did Ana maintain an affair with Dmitri ?… a man she usually detested. Why did Dmitri kill Ana?…. the only woman he loved and  did everything to be beside her. When does passion dominate lives and how it also takes an ugly and dangerous turn, is the question which is hard to understand and solved. Ana the most loved woman by Dmitri also becomes the most hated one during a minor shift of emotions and he decides to strangle her only to repent later. This experience of passion and pleasure together, and  the strong contradiction in the journey of emotions result in loss of  logic and sanity in humans which sometimes leads to their destruction.

We find the less passionate Ines being more level headed and reasonable while deciding things. We find her never losing her cool. Her confidence and her no passionate stubborn nature several times helps her from being inconsiderate. Simon is the most emotional one who believes in individual thinking and understanding. He is the constant supporter of David but is never acknowledged by him. He is hurt many times by David’s behavior but sticks on to be the dutiful responsible father to him. This helps him to gain a little confidence from David. To break the emotional ice between them he also surrenders himself to David’s passion and tries to understand him by going through his journey and learning to see things through David’s eyes. To him passion and responsibility are combined and sometimes also confuse him making him mild, submissive and protective towards David who remains the only passion in his otherwise dull life.

Dmitri sometimes becomes the Dostoevsky of the novel. He is philosophical, he can see beyond people and this makes him David’s friend. With all his weaknesses his extreme passion is the ultimate truth which gives him a reason to live and to kill. He encourages David to not submit himself to the ideology of the world and find his path in life. This brings him closer to David than the adorable Simon. He also understands Simon’s responsible behavior and his ideology towards life. In dire need it is Simon he confides with, also knowing that Simon hates him and very much wants him out of his life. But in any kind of emergency it is Simon whom he wishes to see and seek help from which he also gets from Simon who is more humane and therefore suffers much for not detaching himself from the individuals around.

We find all the characters dominated by passion in different ways. They mould their lives accordingly and are very different from one another while dealing with their life’s tragedies. Jesus is not a character in this novel but the ideology of David, his growing up process, and his philosophy of life. We find the human process of thinking and evolving in every stage of all the characters. Hence Jesus is not a symbol of religion but the symbol of truth which is responsible in the growth and development of a human being. It’s a spiritual force which guides every human being and which moulds him into an individual.

The novel has no particular beginning or ending but while the reader tries to understand the essence of it, and the lives and ideals of the characters we find passion as the common point in their lives and everyone are joined or detached depending on the intensity of the passions and how they deal with them.