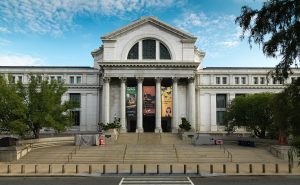 After a visit to the White House and the Capitol Hall in the morning, our guide took us to the Natural History Museum by lunch time. We had to finish the museum visit and meal in exactly an hour and a half there. The movie “Night at the Museum” with a Natural History Museum theme seemed exciting to all of us since we had seen it before coming here.

Smithsonian Natural History Museum: – In the rounded Entrance Hall we entered each section from each of the  gates. We first walked past the dinosaur fossils section on the right hand side. In fact it definitely takes a day to look at everything.  We decided to spend an hour and a half on exhibits and half an hour for lunch.

That’s why we watched and took a quick look only at some of the important things. We dropped the Birds section on the ground floor, the Animal section on the first floor and the Mammal Hall.

Hope Diamond: In the gems section upstairs we saw the world famous “Hope Diamond”.  It’s discovered in the “Kollur mine” in Guntur district. The diamond belonged to the Golconda Empire around 1650 AD and was later owned by Jean Tavernier, a French diamond merchant. That’s why it’s first called the “Tavernier Blue Diamond”. An historical novel “The French Blue” was also written on this subject. This diamond, which came into the hands of a wealthy merchant in England in the 18th century, Thomas Hope, was later known as the “Hope Diamond”.  The diamond, which has traveled around the world for centuries, was donated to the Smithsonian Museum in 1958 by Harry Winston, a New York diamond merchant.  No one at the time knew why the million-dollar diamond had to be donated.

We could not go inside the small butterfly exhibit that is allowed with special tickets at the Insect Zoo.

Even Egyptian mummies could not be seen due to lack of time.

The Dinosaur Virtual Show was great.  It’s amazing to see our counter images standing opposite among the dinosaurs roaming the screen.

It took about fifteen minutes to get to the cafeteria line there for lunch. We finished eating and went out.

All the exhibits there were as natural as waking up at night as shown in the movie “Night at the Museum”.

On the way out, one woman missed our group on our bus. Her phone was  switched off.  The bus did not wait for her and so they passed it on time.  Luckily, the bus turned right at the back of the museum and found the missing woman waiting for the bus along with their group. I breathed a sigh of relief.

We may take a family photo with President Obama and Michelle with a special ticket. Of Course, we don’t have a chance to take a photo with Obama near the White House anyway, so at least we can be there then! So we took a family photo near these statues which are formidably natural. We spent an hour-long time in the museum taking a great deal of photos.

The children stood in line for the “Wax Hand” and dipped their hands in preparation until the last minute.  We could not buy them at the right time as the bus had to move at once, and there’s a large line near the bill counter.  The children were upset, cutting sorry figures, but recovered in another hour. I just felt sad. The tour didn’t even drop ten minutes of extra time for us.  That’s why we couldn’t bring children’s wax toys. We consoled them, promising another visit to the Wax Museum near us once again.

DC River tour: They took us to the DC River tour for another hour and a half in the evening. We felt it was rather a waste of all we visited on the tour of that day. That river boat tour was no way greater than any city river tour we had gone in the past. As we booked it under a tour program, we paid a customary visit.

Lincoln Memorial: We reached the ‘Lincoln Memorial’ that day by late evening. The large statue of  Lincoln sitting massively on a pedestal in the middle of the spacious, high-rise courtyard greatly impressed us. The tour guide said that there was no time to show the adjacent “Jefferson Memorial”.

I felt sitting on the lawn quietly forgetting the freezing cold gradually enveloping the evening.

Again the Chinese restaurant  for dinner.  This time, however, one table for one person was reserved for each group.  Another South American family was also there with us at that table.  Long beans, tofu, and four or five other plates of non-veg, with crabs, tiger prawns, long fish fried pieces, sweet orange meat, sticky white rice filled with soya sauce all, arranged on a round revolving table. We felt dismal looking at the stuff on the table.

Varu was greatly upset. We tried to eat something out of the stuff as we were hungry. Though it’s a matter of laughter now, it’s very difficult  to eat a meal that was not fairly tasty.

As our overnight stay was in DC that day,  we got there quickly. As we all got tired we slept well. From there our morning journey was another four hundred miles to Niagara. We need to get up as usual at five o’clock in the morning.