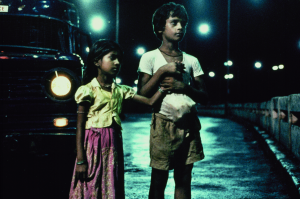 “We are a country that prides itself on power and wealth, yet there are millions of children who go hungry every day. It is our responsibility, not only as a nation, but also as individuals, to get involved. So, next time you pass someone on the street who is in need, remember how lucky you are, and don&#39;t turn away.” — Lesley Boone

Salaam Bombay! is a film directed and co-written by Mira Nair along with Sooni Taraporevala. The film premiered at Cannes Film Festival in 1988. The film won the Camera d’Or at Cannes, the Best Hindi Feature Film award at the National Awards, the best Foreign Film Award at the National Review Board, and was also nominated for the Best Foreign Film at the Academy Awards and the Cesar Awards.

Mira Nair needs no introduction to the international audience. She started her career as a theater actress. She made several documentaries. Salaam Bombay! was her first feature film. Her films Mississippi Masala, Monsoon Wedding, The Namesake, The Reluctant Fundamentalist, Queen of Katwe are well acclaimed.

Soon Taraporevala is a longtime collaborator of Mira Nair. She wrote the screenplay for Nair’s Salaam Bombay!, Mississippi Masala, and The Namesake. She won several awards for her work in films. She also directed two films titled Little Zizou and Yeh Ballet.

According to some estimates there are 100,000-150,000 children live on streets of Mumbai. They are mostly runaways. They run away mostly due to problems and fights with their family and/or to escape poverty. They work mostly at hotels, restaurants, tea shops, and other street eateries. Some work as rag pickers, shoe shiners, beggars, etc. A small number of children engage in stealing, drug peddling, and prostitution as well.

The film opens with Krishna a 12 year old, helping wind up the circus. His boss asks him to fetch some tobacco, by the time Krishna comes back the circus is gone. With the money he has, he travels to Bombay (now Mumbai). He befriends some other homeless children and an adult called Chillum. Chillum is a drug peddler and drug user. Krishna finds a job at a tea stall to distribute tea at a train station near a red-light district. Krishna is called Chai-pau (tea and bread) by everybody. He befriends a sex worker called Rekha and her daughter Manju. Rekha
is married to a drug dealer called Baba whom Chillum works for.

Krishna wants to earn 500 rupees to go back to his family. In the past, he burnt a motorbike that his abusive mechanic brother bought home. Krishna’s mother sent to Krishna away to earn money for the damages. Krishna one day sees a new girl being brought into the area. The new girls is sold to a madam called Gangu Bhai. The girl doesnt speak any Hindi. She is called Solva Saal (Sixteenth Year) by everybody. Manju is jealous of the attention Krishna pays to Solva Saal. The rest of the film how everyone’s life is wrecked due to the tough life on the streets of Mumbai.

The film is all about life of children on the streets where the life is tough. They have no adults to help or guide them. They are paid a pittance, exploited, and run into trouble with the police even when they are not at fault. The film makes this point very effectively.

One may draw a quick comparison to the film/book Lion. Lion is a memoir, and Saroo Brierley has lucked out. But that is not the case with everybody.

Krishna is sad in Mumbai. He is alone. While Rekha cares for him, she is not a family. Another pal Chillum is a good for nothing druggie. Krishna finds work, but nothing is permanent. His love interest is his friend but she is not interested in Krishna who is much younger than her. Krishna’s life is hard, the choices he makes do not work for him well.

Manju is a partially neglected child. She is loved by her mother. But due to the nature of Rekha’s work, it is not possible to have her child always with her. Her father Baba is abusive. Manju is lonely, her only friends are the street children who live in that area. She really likes Krishna and even helps him at his job, be it plucking chicken or serving food at an event.

Chillum is an important character in the film. He is a drug peddler who mostly targets foreign tourists to sell them drugs at significantly higher price. When he falls out of favor with Baba, his addiction gets him. He in someways represents the future of some of those street children.

Rekha who is sex worker doesn’t have an easy life. She has a daughter, it is tough to raise her. She is a nice person. She helps the street kids whenever they are in need. Her husband Baba is the villain of the story. He is a pimp and drug dealer. He is cruel.

In my opinion this is Mira Nair’s best film. The film is hard hitting and very realistic with excellent performances. It is also extremely well written without any unnecessary scenes. Background score by L. Subramaniam is fantastic as well.

Mira Nair cast street children in all the children roles. Shafiq Syed as Krishna, and Hansa Vithal as Manju are fantastic! Raghubir Yadav who is one of the finest actors of Hindi cinema played Chillum. He is excellent! Anita Kanwar and Nana Patekar were very good in their roles as well. This is film is also the debut film of Irfan Khan where he appeared as the letter writer.

Watch this film because it is a master piece.