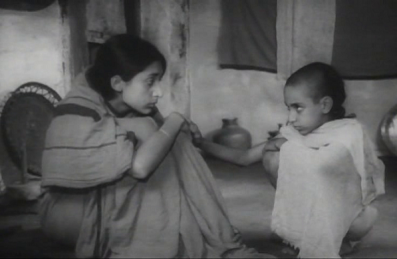 Ghatashraddha is a film made by Girish Kasaravalli based on a novella by U.R. Ananthamurthy. The script and dialogue were penned by K.V. Subbanna who was uncle of Kasaravalli. This film won the National awards for the best feature film, the best music, and the best child artist.

Girish Kasaravalli graduated from the Film and Television Institute of India in 1975. Ghatashraddha is his first film. His films have won 14 national awards including four for the best feature film. This is Kasaravalli’s first feature film. Before this film he made a short called Avashesh as a part of his course requirement. This film also won the National Film award for the best short fiction.

U.R. Ananthamurthy was a well known Kannada writer. His novels are translated into many Indian languages and English. He won the Jnanpith award, one of the most coveted literary awards in India. Some of his well known works are Samskara, Bara, and Prashne.

The film opens with a scene in temple, where a person ask why Yamuna is not seen much in the temple. Yamuna is the daughter of Udupa who runs a Vedic school. He has about 5 unruly kids studying in the school. The school is running at a loss as people are not interested in attending Vedic schools anymore. Yamuna is a kind hearted widow, who helps out with logistics of the school. She is sick and sad. Nani a young student joins the school. Nani is innocent and is still a child and is timid by nature. The other kids in school bully him. He is homesick and grows close to Yamuna. Yamuna takes care of him and dotes on him.

Yamuna has an affair with a teacher of the village school, and becomes pregnant as a result. She meets him secretively. Udupa leaves the village to get some funds for the school, gossip in the village breaks out as the students learn about Yamuna’s affair and her pregnancy becomes public. Now Yamuna must deal with the consequences.

The film is mostly told through Nani’s point of view. There are some scenes where we don’t see the film though Nani’s eyes. The scenes before he joins the school, also the scene where we learn that Yamuna is pregnant are among them. The rest of the film more or less happens as Nani sees it. The focus that way is entirely on Nani’s relationship with Yamuna.

The film also shows how one gets punished for not following rules of the society theme revisited by U.R. Ananthamurthy (the writer of the original story) in another novel Samskara (which was adapted as film by Pattabhirama Reddy).  I don’t know when the film was set. The costumes and not having electricity in the village point to a time closer to when India became independent.

Coming to characters of the film, Nani is out of his home for the first time. He is not exposed to life outside of his home before. He is the youngest student of the school. He is bullied by the unruly students called Sastry and Ganesha. Yamuna is the one who he gets close to starts loving her (just to clarify this love is not sexual, it is like that for an aunt or a sister). He doesn’t judge Yamuna, nor does he know how society really works. He thinks she is sad and needs affection.

Yamuna is a nice and affectionate girl, who dotes on Nani. She is a caring person in general who feeds a beggar every night. All we know is she pregnant as a result of a relationship with a school teacher. We don’t know anything about the school teacher, except that he is weak and leaves the town as soon as Yamuna aborts the child with the help of a mid-wife. She is a widow, it is unknown if she was expecting any kind of marital relationship with him. She is sensible enough to that there will be gossip, but naive enough to go with that.

The other prominent characters are Sastry and Goda. Sastry is an orphan is ill-disciplined, he steals from the temple harathi (sacred flame) plate (temple goers leave money in the plate for the priest). Udupa is kind to Sastry and doesn’t want to punish him because he is an orphan. Goda is a neighborhood woman who is interested in gossip. She feeds Sastry and Nani upma to get gossip about Yamuna. She is the one who spreads the news that Yamuna is pregnant.

Ajithkumar who played Nani is fantastic would be an understatement. His big eyes that look so innocent yet are very expressive. He won the national award for his performance which was well deserved. Meena Kuttappa as Yamuna is excellent as well. Her melancholy is heartbreaking. Other performances are also very good. They don’t seem to have acted in any other films. I am assuming the cast is mostly from a theater background.

The screenplay and dialogue were written by K.V. Subbanna. He was a well known theater personality of the state of Karnataka. Subbanna was also the uncle of Kasaravalli. It was Subbanna who approached U.R. Ananthamurthy for the rights of this novella to be filmed. Screenplay is fantastic. Dialogue from what I can make out with subtitles was great as well!

Background score was given by B.V. Karanth another famous theater personality. It was quite good and so is cinematography by the great S. Ramachandra.

Watch this film one of the pinnacles of India’s parallel cinema, to the master Kasaravalli at work. The ending does make you shed a tear.