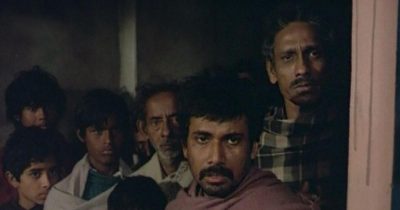 According to the 2011 census there are 10.1 million child laborers working in India. There are laws against child labor, but they are rarely enforced.

Kharij is a film directed by Mrinal Sen based on a novel by Ramapada Chowdhury. The film premiered at the Cannes Film Festival in 1983 and was nominated for the Palme D’or. It won the jury prize at the festival. It also won the national award for the second best feature film and the best art direction. This is the first art film I watched, little did I know that it would influence my taste in films in the years to come.

Mrinal Sen needs no introduction to the lovers of cinema. His films have won awards at prestigious festivals like Cannes, Berlin and Venice. He along with Ghatak and Ray is considered a pioneer of the Indian New Wave.

Ramapada Chowdhury has won several literary awards including the coveted Sahitya  Academy Award. Many of his works have been adapted by films. Kharij, Ek Doctor ki Maut, and Ek Din Achanak are among well known adaptions of Chowdhury’s work.

Every Child has a right to education according to the constitution of India. The government runs free schools for children, but in poorer areas they don’t have good infrastructure. Many poor children in rural areas drop out at an early age. They find employment in various areas in the unorganized sector. Children are mostly employed in agriculture. They are employed in the diamond, carpet weaving, fireworks, and silk industries, as well as domestic help. India has outlawed child labor in hazardous areas in two separate steps in 1949 and 1952. Employment of children in any area including domestic help was outlawed in 1986.

Kharij is set in 1981 in the city of Calcutta. The film opens with a scene in which Anjan Sen asks his wife Mamata what she would like to have in life. She replies she doesn’t want anything. After a few years Anjan and Mamta have the same conversation, this time Mamata asks for live-in domestic help. She is a working woman, it is difficult for her to manage office and household work by herself. The domestic help would do the chores around the house and also plays with their son Pupai. Through their friends they find a domestic help a 11-12 year old Palan. A year later, on one cold night Palan decides to sleep in the kitchen instead of under the stairs (which are in open) where he is supposed to sleep.  The next day he is found dead. Now Anjan and Mamata have to deal with the aftermath of incident.

The film deals with several issues. Extreme poverty forces poor people to send their children for employment at a very young age. When Anjan and Mamata ask Palan’s father about why he is leaving his child, he replies “he will at least have food to eat”.

Palan lives with the family, but still he doesn’t. He is asked to sleep outside even though the living room is free. He has to sleep on a mat, and does not get extra blanket even when it is cold. Mamata makes sure her family is well covered on an extremely cold day, but she does not care whether Palan can deal with the cold weather. The Sens don’t even know where Palan’s parents lived. Even though Anjan and Mamata are responsible for his death in a way, they don’t take the responsibility. While this may seem farfetched, it is not that unusual for it to happen. It was common in those times for employers not to treat servants as real people.

The Sens work with the police to make sure there is no case against them. The Sens also make Palan’s father sign a document that absolves them with the help of police.

Hari, the servant of the landlord of the Sens’ is a silent observer in this film. He is a friend of Palan. He observes each and every incident. He is possibly thinking that it could be him.

Anjan Dutta as Anjan Sen is fantastic. He conveys a lot through his eyes. Mamata Sankar as Mamata Sen is what you expect from her. She is a very good actress and plays her part well. The Dehapritam Das Gupta who played Hari is excellent. His prying inquisitive eyes convey a lot without speaking a word. I wonder why he didn’t act in any other films.

K.K. Mahajan, a regular of Mani Kaul and Mrinal Sen was the cinematographer for this film. His camerawork showcases the claustrophobic buildings of Kolkotta of those years and the nosy neighbors very well.

B.V. Karanth who scored for Ghatasharddha was also the composer for this film. Background score is quite good.

I have a personal attachment to this film. This is the first arthouse film I watched. I was probably 11 years old then. This film made me curious about arthouse films and shaped my taste in a way. This is a great film in more than one way. This film talks about issues without being being loud about it. Watch this film to see the master Mrinal Sen.