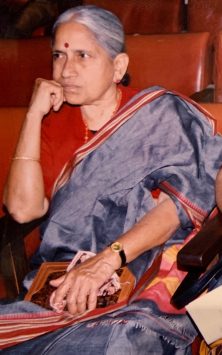 “Of course, you can. I have been waiting for you. What took you so long today?”

“I was just looking at some of the translated stories in your library. I found your translation too by the way.”

“Yes, I too did my part in this great venture. It is often said there are translated versions of many classic books of world literature written by writers like Tolstoy, Gorky and from great English fiction too, into Telugu. In Indian literatures, we find Hindi writers like Premchand, Krishna Sobti, Bengali writers like Tagore and Bankim Chandra and almost all the books of Sarat Chandra and Kannada writers like Sivaram Karanth, Triveni, Niranjana, Anupama Niranjana and many others in Telugu in translation. But till recently we do not find any Telugu books travelling to other languages. Interestingly the awareness seems to be growing now.

For instance, there was Abburi Chaya Devi, who was a strong voice…not aggressive but assertive…on women’s issues in Telugu literature. Born on born 13th October 1933 in Rajahmundry in East Godavari district, she was educated in Osmania University and she started writing in her twenties and continued till almost her 70s. She won the Sahitya Academy Award for her book of short stories Tana Margam in 2005. She worked full-time as a librarian in New Delhi’s Jawaharlal Nehru University. She was married to Sri Abburi Varada Rajeswara Rao, a writer of eminence. She also published a collection of her short stories Abburi Chayadevi Kathalu and a long story called Mrutyunjaya. And that’s not all, she even published children’s folk tales Anagaa, Anagaa. She died on 28th June (year?)2019, in Kondapur, Hyderabad.

The story we will talk about today is originally titled Sukhaantam, which means a happy ending. The entire story is the inner thoughts of the narrator, a housewife to be precise, about what goes on in her life and correspondingly in her mind. Her predicament is not different from several other women after a certain age. Women as we see spend their childhood engaged in fun and games, school and friends and after marriage the responsibility of home care, looking after their children, their schooling, homework, preparing lunch boxes for husbands and children and a number of other tasks fall upon their shoulders, which are, in a sense, a daily drudgery. They are relatively free during late mornings and get time to read the newspaper. In our story the narrator was unable to sleep and takes a sleeping pill. She could not sleep even an hour after taking it. Unless she sleeps, she cannot digest her food and cannot do household work next morning, which would lead to her taking another medicine., she says. That morning she attempts to sleep and gets up suddenly after the call of the postman. Sudden waking up causes palpitations and they take time to subside. She comes to pick up her post which was just a receipt for some subscription they paid. She tears it up in anger and frustration. Then she picks up the newspaper and the news about Apollo 11 voyage catches her eye. Then she goes into details of the journey of Apollo 11, from earth to orbit, from there to the moon and back to the earth. She was constantly worried about the successful launch and operation of the whole venture and keenly followed it spending sleepless nights in the process. At one time she even called the newspaper office in the middle of the night to enquire about its progress. She was greatly relieved when she heard that it joined Columbia safely. She was restless and could not understand why she was so worried about this spacecraft. After this, the in fighting within the Congress party, between Indira Gandhi and Nijalingappa gives her sleepless nights. All the while when she was occupied with the world affairs at the back of her mind, she keeps thinking about her children, about the letters they write to her infrequently. They had decided not to go and live with their son, and her husband was happily occupied with his work and life, and the stress she felt was entirely of her own making. She is unable to cook or do any work or sleep peacefully with these endless worries in her mind.

In fact, she recalls that she was never able to sleep right from her childhood. Apart from her infancy, right from her school days she used to be woken up early by her mother every day and she was not allowed to sleep to her heart’s content. She used to throw water on her face to wake her up. On Sundays she had to get up early for a head bath. During examination time it used to be tougher schedule. The sleep which always had the strongest pull during exam preparation time alwaysnever used to elude her after the exams. Her brother and his wife used to sleep comfortably and peacefully and she used to feel feels jealous of them.

It is a different story after her marriage. Though she had pleasant romantic nights in the early days of marriage she had to get up to answer the call of the milkman. She used to start her morning chores with coffee, breakfast, cooking for husband and getting work done by the maid and by the time she gets to relax, it would be 11 AM and she used to fall asleep to get up again suddenly with the call of the postman or mischievous children ringing the doorbell and disappearing. She could never sleep either before the children were born or after as it was again a busy life with the children growing up. She was worried when they were late in coming home, if they were unwell, whether her son would come first in class, whether he would get a job. When her daughter was married, and she wasshould not be sent home by her in-laws. Now they were happy in their homes. She picks up a newspaper or pick up a book and starts worrying about the world’s problems, with the results she was always bothered and unhappy with lack of sleep. Later on, she also used to wait for the postman hoping for a letter from her children who are so busy with their households that they do not write or contact. This causes her to lose her sleep again.

In the end, she decides to sleep by taking pills so that she can have undisturbed her sleep. She tilts the bottle and a lot pills with lot of sleep in them fall into her hand. To play safe she leaves a note for her husband “Don’t get panicked! I am just sleeping! Don’t think that I have committed suicide! Don’t get it wrong! I am just sleeping for the sake of sleeping!”

The story ends there. In this, the problem of sleeplessness is not hers alone. Many women actually never get to relax and sleep off their tiredness. In India and in most countries, women take the brunt of household tasks and if they are career women, they have to satisfy two bosses, at home and in office. In the entire story, the woman gives. She never talks aboput appreciation or recognition from anyone in the family. We take this labour of love for granted and never think of these unsung, unhonoured heroines in our lives.

“Yes, true we never offer to help my mom or give her a day off for rest and relaxation. It never entered either my mind or my dad’s. If my mom did not wake me up, I would never have gone to school even for a single day. My dad would not have made it to any meeting on time. But she always sacrificed her sleep to do it and we hardly ever acknowledge. It is our duty to see that they do not get neurotic and make worrying their full-time occupation. Thanks, grand ma. What a thought-provoking story!”