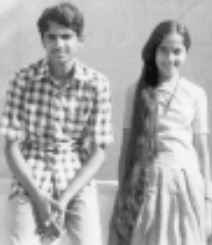 Naveena joined Stanley Junior College for her Intermediate with the  Science group. She used to spend a lot of time on record work. She has beautiful hand writing. Raju used to take her help for any drawing work he needed for school. She used to conduct some practical work at home too, – buying frogs and such other creatures for dissection. She didn’t like Physics or Social Sciences. She was all the while preparing for medical entrance examination. Soon after the first year of Intermediate,  she went to Guntur for special coaching. She stayed with our friends, Tulasamma and Raghava Rao Sakhamuri. Both were working in colleges. Their son Jitendra was a little older than Naveena. Tulasamma’s mother Seethamma took good care of Naveena and would feed her lovingly. Vijaya, – their daughter was in the medical college then, a very bright student. She is a Neurologist and her husband Dr. Raghava Sarma, – a cardiologist, later opened their own hospital, Lalitha Hospital in Guntur.  Raghava Rao is Innaiah’s classmate. We remain close friends even after all these years. Naveena could not take the entrance examination after Intermediate because she was under-age.

She joined Nizam’s College for her first year B.Sc. with Genetics but was preparing for entrance exam.  But she could not take it as she had to undergo emergency surgery for appendectomy  that very day.

It was a medical emergency. She requested the doctor to administer pain medicine and let her write the exam. But we didn’t want to take the risk. Her health was more important than her studies. She was disappointed thinking one more year was going to be wasted.

The A.P. government has a medical exchange program with other states and can exchange students. Naveena applied to the government with her marks and medical certificate requesting them to allot her a medical seat in the exchange programme. Mr. Bhavanam Venkatram then the state Chief Minister helped her to get admission in Government Medical College, Bangalore. He was a good friend of Innaiah. We all liked him and respected him, – he was our family friend. Thanks to him. Naveena didn’t have to waste an year to pursue medicine studies.

She stayed in the college hostel. Her room mates were Shobha,- now a dentist, and Jaya Varadarajan, – an anesthesiologist, both also settled in USA. Their friendship continues, quite often,  they talk to each other on phone.

We missed Naveena a lot when she left for Bangalore. She missed us. Once a  month, – on one weekend she used to take Jabbar Bus and come home, – just for a day or two. We used to happily spend time. We also visited Bangalore several times when she was there and also visited Mysore, – spending  the day in Brindavan Gardens.

Radha Krishna Adiga, his wife Akhila, Vijay Raj Kocheta and his wife Kantha, became her close friends in Bangalore even though none of them are doctors. They come to the US to visit her they are great friends to all of us.

Raju decided to study Arts, – no Math, or  Science for him. He decided what he wanted to study in his 8th class itself. When he went to Chaitanya Junior College for admission, then Principal Sundara Ramayya, seeing his  marks, advised him either to take Math or Science and gave him one day time to decide. Raju was already determined to study Arts and nobody could ever change his determination. Just as a mark of respect to the Principal, he waited for a day before joining the Arts group.

He did extremely well in his studies. Ashok Atluri, Gurumeet Singh, Jayesh Shah were his good friends in the college. They branched off in their studies, – Ashok became a big business magnet, Gerumeet and Jayesh run their own businesses. In the junior college Raju’s English teacher Anandhi madam influenced him greatly. He studied many English books with her encouragement even though he has always been an avid reader.

Raju was conscious of social issues even as a kid. He used to write Letters To  The Editor Coloum in local English news papers regarding certain social problem when he was in 7th class.

Raju joined Nizam’s College for 3- years B.A. degree course, with Economics, Geography and Sociology.  He always maintained his ‘First”- in his studies. After B.A., I asked him to appear for I.A.S  exam. But he said that while he could clear that exam and maybe top it too, he didn’t want such a job where, if the government is not happy with him, it could post him anywhere. I knew once he decided on anything nobody could change it.

He joined Dr Verghese  Kurian’s Institute of Rural Management (IRMA) in Anand, Gujarat. Initially he had to work very hard as most of the syllabus was math- based. But he managed to master his subjects and did extremely well in the course. He got some scholarship from the Institute and he managed with that. He never asked us for money. He must have maintained very economically. Mr. Praveen Aggarwal- a math wizard, Rajnish  Puri, Sanjay Goel were his friends from the IRMA. They all settled in America and he is still very close to Praveen and Rajnish.

In campus placement Praveen and Raju were selected by A.P. (Dairy Development Corp) for marketing jobs, along with their friend Harish, Praveen was initially posted in Hyderabad and Raju sent to Ahmedabad. Praveen stayed with us untill he moved to Delhi after a few months.

After working for some months in the marketing field Raju felt that he was not meant for such a job. He took admission into the Times of India’ Journalism School, in Delhi and left his job with APDDC. In Delhi he stayed with Praveen. Praveen’s mother and sister Neeru took very good care of Raju until he finished his course in Social Journalism.

In the Journalism School his Professor Thomas   Ooman saw the spark in him and envisioned a bright future for him. Later  he got a posting in The Economic Times. He started his job and attracted the attention of his management with his work, and was sent to Germany on assignment.  It was his first trip abroad and  good exposure to him outside India.