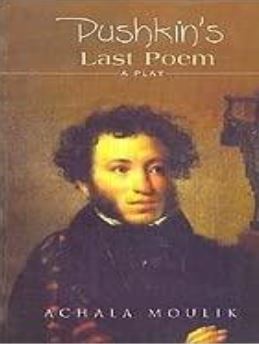 Alexander Pushkin is known as the founder of Russian Literature. Born in 1799 he lived for 38 years on this planet and the fame he earned through his lyrical expressions has immortalized him in the world of letters. He is mostly compared with the Italian poet Dante. Before Pushkin Russian poets were mostly copying the art of expression from the French, German and the English poets. During that time Pushkin has given an originality to the Russian poem and therefore is known as the best Russian poet. He was born in a royal family but choose to be the voice of the common exploited man. He was a rebel all through his life and mostly spent his active writing years in exile. It is said that he wrote his first poem when he was just 15 years old. At 22 his work ODE TO LIBERTY became a sensation and the Tsar sent him to exile for the rebellious expression in the poem. It is said that this poem inspired most of the Russian literates and was a result of the revolution at that time.

Achala Moulik writes this play which talks about the life of Pushkin. It is a biographical play and is wonderfully written. It was published in 2008 by National Book Trust India to commemorate the 170th death anniversary of Pushkin and the International Year of Russian Language.  Through this play the writer in detail describes the poetic excellence of Pushkin, his rebellious attitude towards the oppressors and the wrong choices he made in his life which led to his untimely death. The play starts when Pushkin at an young age of 22 was sent to exile after his “Ode to Liberty”. He now lives in a mansion at the foothills of the Caucasus Mountains. Here he meets Marya Raevskly.  Marya is the daughter of a general who fought against Napoleon and is highly respected among his kinsmen. Marya falls in love with Pushkin. Though Prince Sergey Volkonsky is interested in her, she dreams to be beside Pushkin and be a part of his personal and literary life. Pushkin admires Marya but being young and too energetic and enthusiastic at heart, he does not want to get married early. When Marya proposes to him, he talks about his thirst for freedom and expresses his wish to live life to the fullest before getting into a commitment. He also says that he needs freedom to create, and also to suffer for his ideas. Marya promises to wait for him until he decides to settle down.

Pushkin becomes famous as a poet. People love him and appreciate him for his work. The Tsar feels insecure about this fame and Pushkin is sent to exile from one place to another. Being an idealistic and a master of words he inspires many to raise their voice against the oppressors. He also personally enjoys the fame and attention he gets in the royal society. He gets attracted to women around, both married and unmarried and enjoys few adventures with them. His relationship with a Governor’s wife becomes gossip among the royals. The rich general’s wife chooses him to be her playmate. She is not concerned about his literary status neither his intellect. She simply  enjoys flirting with an young writer who is wanted by many woman at that time. Marya comes to meet Pushkin and finds him busy with other women. She tries to explain to him that this is not a path of happiness but Pushkin plays a deaf ear to Marya’s words of wisdom. He enjoys the attention he gets and wants to live life as it comes. He argues with Marya that life and literature are quite separate. One can write seriously and can also live riotously.  Marya is disappointed with Pushkin’s thought process. She leaves warning him that if one sows wild oats they may fail to reap a fine harvest.

Prince Sergey proposes to Marya. He explains to her that he is aware of Marya’s love for Pushkin. But considering the status of Pushkin’s mind, he tells Marya that Pushkin is a genius but cannot be trusted for love. Any relation with him can only lead to heart break. He explains that great artists live in a world of their own. Their minds conceive of great ideas and powerful emotions, but their heats are often untouched. Men like Pushkin, are immersed in themselves, While he may be ready to mount the gallows for liberty, he may not be aware of the people around him. He encourages Marya to be Pushkin’s inspiration but from a distance, so that Pushkin cannot hurt her with his irresponsible behavior. Sergey promises Marya that he may not be able to portray her in poetry but he shall always honor her. Marya understands the depth of Sergeys words; She is aware of Pushkins adventures and believes that her life as Pushkin’s wife will not be with happiness. She marries Sergey. Pushkin feels bad about Marya’s decision but is not ready to understand that his philosophy of life is going to bring him ruin. He continues to portray Marya in all his works. For Pushkin Marya is an everlasting inspiration and a model of a genuine woman. Marya appears in all his works in some form or other through his characters and he feels he cannot come out of this influence.

Meanwhile there is a revolt in the country and Tsar Alexander dies.  Nicholas becomes his successor. Many of the revolutionaries are sent to Siberia and some are executed. Some of Pushkin’s friends are exiled and a few are killed. A few revolutionaries confess that Pushkin’s poetry inspired them to fight for liberty. Nokolas decides to be careful with Pushkin. He meets him and offers him a place in his court. Pushkin accepts the offer. He is tired of his exiles and the solitary life. He decides to be in the court and also write his own ideas and spread the message of liberty all over the country. Marya’s husband is sent to exile for his idealistic views and Marya follows him.

Pushkin becomes a celebrity in Petersburg. He marries a beautiful lady Natalya. He expects her to inspire him and help him to grow as a writer. Tsar Nikolas meets Natalya and is enchanted with her beauty. To keep her beside him, he offers a job to Pushkin. Natalya falls into the attractions of the royalty and spends most of her time with balls and dances. Pushkin becomes lonely. Natalya has a string of admirers and rumors of her illegitimate affairs travel around. Pushkin finds her in another man’s arms and he challenges the man for a duel out of anger and frustration.  In this duel he is badly wounded and dies the next day. He writes a poem dedicating it to Marya, which he remembers during his last minutes, in which he expresses his devotion towards her. He calls it as his Last poem.

Pushkin was a man of ideals. He strongly believed that the wish for human dignity is not politics but the basis of existence. All races should have the freedom to practice their own religions, speak their own language and observe their own customs. He wrote and practiced these ideals. Though his wrong decisions were the result of his sad personal life, as a writer he was always well respected, admired and was an inspiration to several generations of his fellow citizens. He also believed that Merriment does not help creativity or enhance one’s perceptions. It is pain; solitude and anguish that makes one create. He was a wonderful creator of verse. He wrote much about the Russian culture and their ancestors. He wrote in praise of the Decembrists who fought for liberty and said….

In the depths of Siberian mines,

The heavy chains will fall

The prison doors will open outside,

Freedom will await you

Your brothers will hand back your sword,

He tried to bring the old Secret Russian Aristocratic tales in their true form into his poems.. He tried to open many secrets of the royal families and wrote

Perhaps in days to come some studious monk

Will light his lamp as I do here

Brush away the dust of Centuries

And recopy these true reports

In another context Pushkin writes about himself,

No, I shall not die entirely And my soul,

My lyre will outlive ashes and the void

My  name will ring throughout all Russia

Every tribe of the land will call to me

The proud descendent of the Slav, the Finn,

The final song he dedicates to Marya goes like this…

Know it again, at least, the rhyme

That once, I think, was dear to you

And know that since that parting chime,

The memory of words last spoken

By you and your sad wilderness

Have been my only sacred token

Achala Moulik adds a lot of grace and emotion to her play and makes this a worthy read. To all those who admire poetry and are interested in biographies definitely should read this play for the simplicity, straight forwardness and the matured philosophical style of the writer. This is definitely a wonderful attempt made by the writer to immortalize Pushkin and introduce his literary genius to the Indian mind.