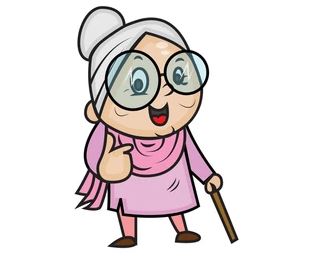 Varun ran into the living room crying,”Ammamma, amma just scolded me saying that I took chocolates without telling her.” Lakshmi took Varun into her arms and asked what happened. Varun continued saying, ” amma told me not to take the chocolates, but i still did, and amma said doing so was stealing.” Lakshmi tried to console Varun: “Amma always has your best interest at heart. You shouldn’t feel bad that she scolded you.Taking something without telling your parents is like stealing. You should never do that. There will be many problems in doing so.” “Ammamma, did you ever steal when you were younger?” questioned Varun.”Yes I did” replied Lakshmi. Varun sat bolt upright on listening to his grandmother’s answer.

“You did? What did grandfather say?” he asked.  Lakshmi laughed and continued,”I didn’t meet your grandfather yet. I was only five years old.”

Varun excitedly said, “Oh that means you were as old as I am now. Ammamma, it would be awesome if you are five years old now. We both would be good friends and play so well together. Lakshmi chuckled,”well, when i was five years old, I didn’t even know that you will be around now.”

Varun asked in dismay, “What, why didn’t you know I would be around? Tell me the truth. Didn’t amma tell you that i will be born?” Lakshmi had to deviate him from the topic as she knew she couldn’t answer the questions Varun might ask in this regard. “Okay, Okay, you asked me about me stealing something, let us get back to talking about that now.”

Hearing all this banter, Prabha, Varun’s mom came into the living room and chided her mother “Is this what you should be talking to a little kid about? You could have just scolded him and left it there, why start talking to him about your past and about you stealing things?”

“Oh don’t you worry Prabha, things were very different when i was younger than they are now. Things aren’t valued as much now, hence I am telling him the importance of the values in life.”

Prabha went back to her work despite not being satisfied by her mother’s answer. Varun did not like being distracted from the story. As soon as his mom left the room, Varun pulled on Lakshmi’s arm and asked her to tell him the story of her stealing. Lakshmi looked at Varun pensively and started, ” I am telling you my story not because your mom left the room, I would tell this story even in front of her. You should never think of doing anything behind her back. It is always best to talk to her about the things you want to do. That way she can support and guide you in the right direction. Now, let me tell you my story. So, one day, when I was five years old,there was a big get together in our house. My parents were very busy with the arrangements. All the kids were in their finest clothes and were busy playing. We then heard a whistle from the street. In those days, vendors used to sell cotton candy on the street and would blow this whistle to attract buyers. I loved cotton candy, who doesn’t like eating the pink candy on one end of a stick? My parents used to give me money to buy the cotton candy everytime the vendor came onto the street.

Now seeing that the vendor was out on the street, I looked around for my parents to ask them for money to buy candy. But they were very busy and didn’t pay any attention to me. Well, I knew that my dad would always give me money from his wallet that he kept in his shirt. I went up to the wall on which his shirt was hanging on, brought out his wallet, took a one coin and ran onto the street fearfully. I never touched my dad’s wallet so I was subconsciously afraid i think.”

“What? What will coin get you ammamma? You should have taken your dad’s credit card!” exclaimed Varun. Lakshmi laughed and told him that they didn’t have credit cards when she was young and that the coin that she took was a rupee coin and it was very valuable in those days, unlike now.

To that the vendor told me that the coin I gave him would buy a lot of candy. I told him that I only want one, to which he replied that he didn’t have any change to give me, so he would take the money from me the next day. I did not want to take the candy without paying him, what would my mother say? So, I made him give me more candy and bought all my cousins candy. He gave me the change for my remaining money in the form of a handful of coins. I took them and hid them under my books. Even doing so, I was scared.

I still had so many coins, I wanted to return them to my father’s wallet. But at the same time, I started thinking that if I kept all those coins, I could buy candy anytime I wanted, without having to ask my parents. If I did return so many coins to my father’s wallet, it would only arouse his suspicion and he might end up scolding me for not asking him. Hence, I remained quiet about the whole incident.

My father, however, saw the candy in all the kid’s hands and thought that I was behind this, so he called me and asked me if I took the money from his wallet. Well, I told him what happened, as I never lied to my parents before. My father was angry at me and told me that taking something from a person without telling him is called stealing and that lying about it was worse than stealing. He told me that the next time they were busy at anything, all I had to do was wait till they were free. I gave him all my coins and that helped allay my fear.

Just imagine if I couldn’t return the coins to him, I would feel so guilty about hiding those coins. It was easier this way, having told my father everything that happened. Well, I was so young when this incident happened, so I didn’t know much. I just wanted to buy the candy and wanted money to do so. After that incident  I relaized that it was easier to be truthful about things and even get scolded if necessary than to bear the guilt of a mistake. That is the moral of my story also.” concluded Lakshmi.

Well, now, Varun reassured his grandmother that he would never make any mistakes again and that he learnt his lesson.