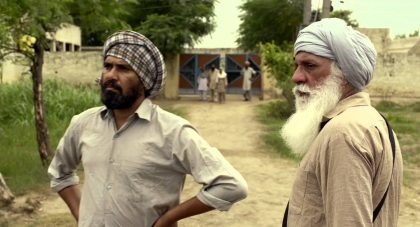 “An eye for an eye will only make the whole world blind.” ― Mahatma Gandhi

Chauthi Koot is a film made by Gurvinder Singh, based on two short stories by Waryam Singh Sandhu. The film premiered at the Cannes film festival in 2015 where it was received with a 10 minute standing ovation.  It was nominated for Un Certain Regard at Cannes, but did not win. It won the National Award for the Best Punjabi film, and also won awards at the Mumbai Film Festival and the Singapore Film Festival.

Gurvinder Singh is a graduate of National Film and Television Institute of India, Pune. He later attended a master class taught by Mani Kaul which left a profound influence on him. Gulvinder Singh’s first short film is Pala, a documentary based on one of the folk singers of Punjab. His first full length narrative is Anhe Ghore Da Daan which won a few awards. Chauthi Koot is his second film.

Waryam Singh Sandhu is primarily a short story writer who writes in Punjabi. He won the prestigious Sangeet Naatak Academy award for his story Chauti Koot on which a part of this film is based on. Sandhu’s works have been translated to several languages.

The demand for Khalistan a separate state for the Sikhs gained momentum in the 1980s. In 1984 Indian military attacked the Golden Temple to flush the militants taking refuge. The problem fizzled out in the early 1990’s due to heavy handed techniques and disillusionment in the Sikh population.

I lived in Punjab during 1990-1994 for my undergraduate studies. Killing passengers in the buses was quite common. Nobody went out after 7PM. As I lived in a city on a College campus, the militancy did not directly affect me. However, there were indirect effects. Both at our dorm and college we were constantly guarded by the heavily armed paramilitary forces. For catching a train at 9PM, we had to reach the train station by 7PM. Harassment by paramilitary forces was not uncommon. We always carried our identification cards, just in case there was some trouble.

Chauthi Koot is set during this period of turmoil.  Two men who are Hindu men hurry to catch a train to the city of Amritsar but miss it. They see that there is a train that is going to Amritsar, but no passengers are allowed. They meet a Sikh who also missed the train. They try to persuade the guard of the train to let them in. The guard refuses but these three people force themselves in. They see that there are more people in the train.

Jugal, one of the Hindu duo remembers an incident in the past. While traveling with his wife and daughter to his in-laws home, Jugal loses his way. They go to Joginder’s house to ask for the directions. Joginder’s mother knows Jugal’s wife. The mother asks Joginder to drop the Jugal and his family at Jugal’s in-laws’ home.  Joginder lives in a remote house as it is closer to the land he cultivates. Joginder’s family owns a dog for their protection. The dog barks when the militants make rounds, so they want it killed. Joginder gets an ultimatum that night that he has to either get rid of the dog or he will be killed. They next day paramilitary forces show up and turn the house upside down and beat up Joginder who objects to it. What happens to the dog and the dynamics of the passengers in the train makes up rest of the story.

The film is about trust and mistrust between the Hindus and the Sikhs. Jugal doesn’t hesitate to ask for a help from a Sikh. He thinks that that person is a peasant is likely not going to be a militant. Joginder is fine helping a family even though it is not very safe to travel at the night. A few years later Jugal is not comfortable with the Sikhs who are already in the train when he forces in.

Another angle explored is the predicament of people caught between the militants and the cops. In any armed conflict the common citizen has the most to lose. They bear the brunt from both the sides.

In the film the dog is a metaphor for the harmony and the spirit of Punjab. Both the militants and the paramilitary forces are trying to kill that spirit. The back of that spirit may be broken, but does it survive is the question that needed to be answered.

Gurvinder Singh is one of the few auteurs in the Indian film Industry. The film is artistically fantastic! The story told mostly though glances and a lot of subtlety. Hope he continues his good work!

Two things worth mentioning are the editing and the cinematography. They alone can be a reason to watch the film.

Watch this beautiful film that explores the complex effects of armed conflicts on people. It is also a work of art!