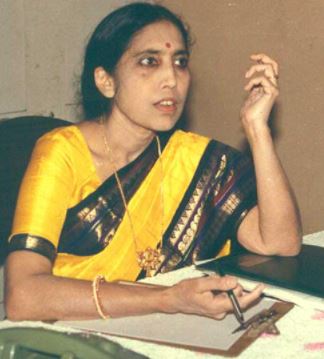 Ravi: Hi grandma, long time since we talked of stories. What happened, are you not going to the beach or your friends in the sea whose voices you have been listening have fallen silent?

Grandma: I have not been going to the beach, that is true. Not able to sit for long hours in the current humid weather. But then you were also busy, not finding time to drop me off at the beach.

Anyway, I just revisited a story I read in my younger days. It was written by Yaddanapudi Sulochana Rani. She was a very popular writer of our youth. Some people called her a pulp fiction writer. Some others called her a writer who mesmerizes youth with her themes and style. She was also often referred to as someone who sells dreams. But no one ever ignored her. She wrote her stories, soft romances, in a compelling style and readers from 20-year-olds to 80-year-olds read her novels with passion. Some of her earlier novels like Secretary, Jeevana Tarangalu, Vijeta and Meena were filmed. In addition to novels, she wrote short stories and later along with changing times she changed her medium effortlessly. She wrote for cinema and scripts for TV serials too. She adapted herself with ease to the popular media.

This story was from her earlier stories.

Ravi: What is this story about, grandma?

Grandma: I am coming to that. There are only two main characters in this story. It is about a couple and their comfort zones with each other. In earlier times when the writer was growing up as a youngster in a village, she was witness to a kind of traditional perspective on man-woman relationships in marriage. Husband is the main bread earner and so his likes and dislikes and choices are of utmost priority for any woman. The women were taught to look at life from only one angle- that of her husband’s likes and dislikes. She should look fresh and beautiful only for him. She should keep constant vigil on his needs. She should cook the food he likes best. As a consequence, their own likes and choices were often overlooked. If they do not take care of the husband, he may not like to have her in his life. If she is not good-looking, he may look elsewhere for his needs.

In this story Manju and Sekhar are temperament-wise opposite poles. She is sensitive, kind-hearted and romantically inclined and deeply devoted to her husband whereas Sekhar, though he loves his wife, is practical in life and does not wear his heart on his sleeve like his wife.

He is a busy professional, keeps going on office tours and while not in camp, during the day he is occupied with his job and in evenings often goes to the club to meet friends and he also happens to be the secretary of his club. He takes her also often to the club. One striking aspect is that though they are temperamentally unlike each other the one thing common between them that keeps their relationship dynamic is their love for each other.

The story highlights the difference in the perception of love in their relationship. The writer takes two incidents to make this difference conspicuous and pronounced. Once Manju was waiting for him to return from his week-long camp. As soon as she hears his car, she runs out of the kitchen to meet him. While running out she steps on a vegetable cutter placed on the floor by the maid. In her hurry, she did not even feel either the cutter or the fact that she was bleeding profusely from the wound. The entire floor was marked by her footprints in blood from the kitchen to the drawing hall. She hugs him without any concern for her foot. He was embarrassed as the maid came running after her and stopped in her tracks. He suddenly noticed the blood on the floor and concerned, asked her about it. Guiding her to a chair he scolded her for her hurry. He calls the doctor. Their family doctor comes bandages her foot gives medicines and advises her to rest her foot two weeks. Sekhar takes

good care of her staying at home giving her medicines on time. She enjoys his attention, starts feeling that her foot should not heal as, if it improves, he may go back to office. She starts moving around limping. He tells her foot pain may relapse but to no use. Her foot again swells and she gets fever. She was advised surgery to remove the pus around the wound. She starts imagining that her foot would be amputated and her husband might leave her if she becomes lame. One evening, he goes to the club as the anniversary celebrations are approaching and he needs to supervise the arrangements. He tells her he would be back by 9 pm but could not come back till late in the night. Since he did not come on promised time she gets upset and next morning gives leave to all the servants including the cook. But she recovers and next it was his turn to meet with an accident. One day before the club anniversary he was hit by a metal curtain wire and it narrowly missed his eye. He came home bandaged on both his eyes. He becomes totally dependent on his wife to move around. She gets so upset that he had to console her. He was very cool and tells her she must help him to go to the club and now that he is going to be at home she would be sick of him soon. However, that should make her feel happy. She asks how come he was so cool whereas she was so upset when she got hurt.

He explains to her saying that they are two different individuals with two different perspectives. He does not have the insecurities she has. When she was recuperating, she was haunted by fears like he may find her ugly. She may not be up to his expectations and so on. He does not have any such apprehensions. He is always assured of her love for him. In the institution of marriage this self -assurance is important. This unequal relationship is what makes it undemocratic and women are always threatened by the idea of separation, not so a man.

Ravi: very important observation specially in countries like India where marriages do not easily collapse. It is seen as a stigma if one is deserted by the husband. Most of the times society itself does not treat men and women equally when stability in marriages is debated. This stigma makes them feel insecure. Sekhar in this story seem to have an understanding of this situation and never takes advantage of his wife’s threat perceptions. Good story grandma, and such an insightful commentary on marriages and the relationships.