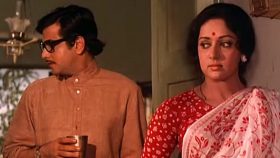 “A disowned woman is asked to come back, what is more respectful than that?” – Brindavan’s Mother

“Am I a person sitting on the street to get picked up when they want and left when they didn’t? What about what I want?” – Kusum

Khushboo is a Hindi film directed by Gulzar, based on the novella Mastermashai by Sarat Chandra Chattopadhyay. This film did not win any awards or played at any festivals as far as I know. I watched this film several times, and in my opinion worth watching every once in a while.

Gulzar started his career as a lyricist for a film called Bandini made by Bimal Roy. He later started writing screenplay and dialogue for films. His first film as a director is Mere Apne which was filmed in 1971. I see Gulzar as a story teller who chose to make films. His films explored human relationships, which not many other filmmakers in India did. Characters of his films felt real, and someone one could relate to. I consider him a very important filmmaker of Hindi Cinema. He is also a poet, and a well respected one at that. He won an Oscar for songwriting, a Sahitya Academy Award for his poetry, and Dada Saheb Phalke award for his contribution to films.

Sarat Chandra Chattopadhyay was very well known Bengali writer whose works were translated to several Indian languages. Several of his works were adapted to films in Bengali, Hindi, and Telugu. His novel Devdas was adapted sixteen times in different languages. He is known for sensitive portrayal of female characters.

The film opens with Kunj selling some toys and other things. Brindavan a doctor is visiting a patient. He meets Kusum there. It turns out that Kusum was married to Brindavan in her childhood. There had been some disagreements between the family resulting the marriage being broken off. Kusum still takes that relationship seriously while Brindavan remarried has a child. Brindavan is a widower now. Brindavan begins to like Kusum, Brindavan’s son and Kusum start to bond.

Brindavan’s mother comes to Kusum’s house for lunch. She gives Kusum her bangles, which means that she wants to accept Kusum as her daughter-in-law. Kusum remembering the way her mother was insulted when her mother comes to leave her as per the custom, returns the bangles. This upsets Brindavan’s mother. This starts the roller coaster relationship between Brindavan and Kusum. The way they resolve their conflict in middle of a plague outbreak forms rest of the film.

Even though the film takes the basic plot from the novella, it differs a lot from the book barring a couple of scenes. The novella was written in the early 20th century. It has a lot of Social messaging, which is absent from the film. The film concentrates on characters like all Gulzar ’s films. The characters are also different and are modernized.

Kusum still considers Brindavan her husband even though he sort of moved on. She was disowned in public, so she wants to be owned in public. She rejects Brindavan’s mother’s gestures to take her back in secret. She wants Brindavan to openly accept her, and wants him to feel the same closeness she feels towards him. She wants her bruised ego to be nursed. That is necessary for any  successful relationship. She has a tender side to her which is shown in her love towards Charan. Kusum in my opinion is one of the finest characters in Hindi cinema penned by a man.

Brindavan is a doctor. He remarries under some strange circumstances. He did not know that Kusum has not moved on. He is a widower now. He is attracted towards Kusum, starts to fall in love. He is also clueless about how deal with a girl  who is full of self-respect.

Kunj Kusum’s brother doesn’t want to get married before Kusum remarries. Kusum doesn’t want to get remarried because she considers Brindavan as her husband. He is not very worldly wise. Brindavan’s mother likes Kusum and wants to accept her as daughter-in-law but is hurt by her rejection.

Hema Malini who played Kusum and Jeetendra who played Brindavan are both mainstream film actors. Jeetendra was called Jumping Jack because of his dance routines in the films. These roles are very different for both of them.  They had to appear like people next door. Hema Malini wears only sarees. Jeetendra wears kurta, pajama (not a night dress) with glasses just like the way Gulzar dresses up. Their performances were pretty good.

Master Raju who played Charan was cute. Sharmila Tagore shines in her scenes as Kamala, the deceased wife of Brindavan.  Asrani  who played Kunj is an excellent actor! He acted well. So is Durga Kothe as the mother of Brindavan.

The film has excellent lyrics and songs. Songs were penned by Gulzar himself the way he did to all his films. Music by R.D. Burman was great.

The screenplay and the dialogue both penned by Gulzar is excellent! The dynamics between Brindavan and Kusum are really good. Gulzar made some really good films, this is one of his best!