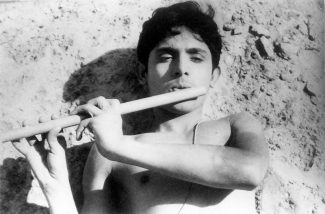 “I am no bird; and no net ensnares me: I am a free human being with an independent will.”

Atithi is a film made by Tapan Sinha based on the short story The Guest penned by Rabindranath Tagore. This film was nominated for the Golden Lion award at the Venice Film Festival. It also won the Second Best feature film award at the Thirteenth National Awards.

Tapan Sinha started his career as a Sound Engineer for the film The Hunted made by Charles Cryton. His first film as a director was Ankush which is based on a story by Narayan Ganguly. He made films in both Bengali and Hindi. Kabuliwala, Jatugruho, Atithi, Ekhoni, Ek Doctor Ki Maut, are some of his well known works. He is considered one the pillars of Indian Parallel cinema.

Rabindranath Tagore needs no introduction. He won the Nobel Prize in literature and was the first Indian to receive that honor.

The film opens to a child running. He is looking for his brother Tarapada. Tarapada is teenager.  Tarapada’s family consists of his mother and four siblings. His family is poor. His father passed away and his brother supports the family by working as a priest. Tarapada lives in his own world is not interested in making money to help his family. He is however a kind person who makes friends easily and helps those in need. Everybody loves him.

Tarapada runs away one day to join a traveling drama troupe. He starts helping with cooking for the troupe and eventually gets his first role as Abhimanyu. Tarapada has a sweet voice. He can sing well also play the flute as well. He leaves the drama troupe and comes back to the family but leaves again to join a gymnastics troupe as a flute player. A few days later he leaves the gymnastic troupe to join another drama troupe. He asks a boat’s owner Motibabu if he could travel with him to a village called Nandigram.

Motibabu is traveling with his wife Annapurna and daughter Charu. Charu is jealous and spoilt by her family. Charu doesn’t like that Motibabu and Annapurna are paying attention to Tarapada.  Tarapada decides to remain on the boat and go to Motibabu’s house. Tarapada befriends Sonamoni a child widow who is Charu’s friend. Charu is jealous of Sona.  Quarrels of Tarapada and Charu, their eventual friendship and what happens to it forms the rest of the story.

The film is faithful to the short story. However there are some minor differences. The story begins with Tarapada meeting Motibabu. There are no details about Tarapada’s family. In the story Tarapada leaves home when he was seven or nine. In the film he is a teenager.

Tarapada has stars in his eyes. He does not like settling and wants to see the world. While he can easily get distracted, he is also very focused and a quick learner. Tarapada’s character reminded me of Apu of Aparajita. Apu like Tarapada wants to see the world and is lost in his own world. Even though Pather Panchali and Apararajita are somewhat autobiographical, there must be some influence of Tagore on Bibhutibhushan Bandyopadhyay who penned those novels.

Charu is a brat who grew up as an only child of her parents. She wants her parents for herself, later she wants Tarapada for herself. Sonamoni is a child widow with no future and she wants to be friends with both Tarapada and Charu.

Performances in the film are very good! The main cast is mostly children, Tarapada himself is a teenager. Tapan Sinha interviewed some two hundred and fifty boys before he selected Partha Mukherjee for the role of Tarapada. Ajitesh Bandyopadhyay who played Motibabu was a well known theater artist.

Camerawork by Dilip Ranjan Mukhopadhyay was excellent. The film is shot mostly outdoors to show the free spirit of Tarapada. Tapan Sinha was a master filmmaker. This film tells you why. Music of the film is excellent as well!

Watch this film to see a master adapting a story of another master.