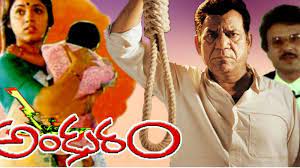 First they came for the Socialists, and I did not speak out—
Because I was not a Socialist.

Then they came for the Jews, and I did not speak out—
Because I was not a Jew.

Then they came for me—and there was no one left to speak for me.

Ankuram is a film made by C. Umamaheswara Rao. This film won the Best Feature Film in Telugu award at the National Film Awards. The lead actress Revathi won the Filmfare Award for the Best Actress in Telugu.

One of the themes that the film that deals with is police brutality. In many disturbed regions the  police have additional powers. It is not uncommon to abuse them. These acts rarely get public scrutiny.

The film opens to police setting fire to a tribal village. Sindhura is a married girl leaving for her in-laws home. She has been married for two years, but as her husband was working abroad she had been living mostly with her parents. Satyam is traveling with his baby daughter in the same train as Sindhura. The baby cries because it is hungry; Satyam leaves the train to buy milk. He is nabbed by the cops. The train leaves, Sindhura ends up with the baby in her hands. She doesn’t want to leave the baby anywhere and decides to take care of it untill its parents can be found.

When Sindhura shows up with a baby, her mother-in-law and husband are not happy. Her father-in-law however is supportive. Sindhura and her husband advertise in the papers but nobody responds. They decide to go to the town where Satyam stepped out the train to buy milk. They go the police station to find out if there were any accidents. They get no information there. Sindhura sees a begger woman feeding her baby with the bottle that Satyam took with him while stepping out of the train. The begger woman tells her that Satyam was nabbed by the cops. The cops deny everything. Sindhura begins her fight to find out what happened to Satyam with the help of a lawyer named Viswanatha Rao. This happens at an expense of her marriage. Her struggle makes up the rest of the film.

The film uses melodrama to make a point. While it is mostly successful at that, it becomes shrill at times. There is too much screaming and unnecessary tears. It also gets a bit heavy handed in parts. Turning it a notch down could have made this film much more effective.

The character of Sindhura is very well written. The film works because of her character. She is raised to be independent and principled. She stands up to herself and for those in need. She doesn’t give up on the relentless fight to find justice. She signs divorce papers right away because she doesn’t want a marriage where she has to compromise on her principles. She has the support of her father, but she fights her own battles.

Another interesting character is Sindhura’s father. He raised his child to be independent. While she makes her own decisions, he supports them. He is proud of her daughter. Sindhura’s husband is spineless. Viswanatha Rao is a helpful legal support and knows how the system works. The police inspector is also an interesting character with a teenage daughter who is strong.

Direction by Umamaheswara Rao is very good. Some scenes in the film are fantastic. For example the scenes in the train in which Sindhura travels, they show different characters which you normally experience during a train journey. Screenplay is very good the film unfolds like a thriller. There is never a dull moment.

Background score by Hamsalekha is very good. The sound track is unnecessary in the film for the most part. There is only  one song “evaro okaru” which is good. Photography is good as well.

Watch this film to see a strong female lead and a strong character.