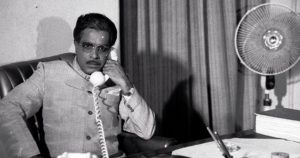 Sinhasan is a film directed by Jabbar Patel, written by Vijay Tendulkar based on two novels by Arun Sadhu. The film won the National Award for the Best Marathi Film.

Jabbar Patel is a trained doctor by profession. He worked extensively in theatre before starting his film career with Samna in 1974 which was nominated for the Golden Bear Award at the Berlin Film Festival. He made several acclaimed films like Umbarta, Jait Re Wait, Sinhasan, Mukta, and Dr. Babasahib Ambedkar. He is also the chairman of Pune Film Foundation and the Director of Pune International Film Festival.

Vijay Tendulkar needs no introduction to any one familiar with Indian theater or cinema. His plays have been translated to many other languages and performed all over India. A few of his plays have also been adapted into films.

Arun Sadhu was a journalist and a writer. Sinhasan and Mumbai Dinank are his most famous novels. The film Sinhasan is based on these two novels.

While growing up in India, I saw that the Chief Minister (the functional head) of the state changed a lot. They supposedly elected by the majority of the state assembly members. Some fell out of favors with the party leadership, some were not liked the elected members of the Assembly. There were always some ambitious state leaders of the party who took advantage of the situation.

The film opens to a seemingly regular day of the Maharashtra state assembly. The opposition asks questions and the ruling party evades the real issues. In midst of this a star reporter Digambar Tipnis walks into the press box. Chief Minister Shinde receives a phone call, informing him that his party members are rebelling against him. Shinde stresses out and leaves the assembly and goes home. He is possibly having a heart attack. However this illness was fake. He does this to get sympathy.

Vishwasrao Dabhade is the finance minister who plotting to become the Chief Minister of the state. His protege is his daughter-in-law with whom he is having an affair. Vishwasrao is trying to form alliances with MLAs (Members of Legislative Assembly) who are dissatisfied with Shinde. He also tries to enlist a famous union leader D’Costa to help with his plan.

Digambar is in the thick of all this. His journalism brought the previous government down. So all politicians try to keep themselves in his good books. Digambar has unprecedented access to the politicians. He loves a sex-worker called Kanta, whom he can’t marry. Kanta is sick now.

The film is plot driven rather than character driven. The film reflects the realities of the politics of the day. Plotting against the leader, forming alliances to overthrow the leader, and the leader further using the state machinery to keep the power is something that still happens in the politics of India. No matter who is at the helm, the life of the common people is the same.

The film shows the the stark differences between the rich and poor. Another issue dealt with is the smuggling activity and Mumbai underworld at that time. The film also makes a point about the sexual exploitation of maids. While it seems like a lot, it comes together well.

The film also has great score by Hridayanath Mangeshkar. It is also very well shot! It captures the dichotomy of the city and its contradictions in an excellent way.

Jabbar Patel is not very well known out of Marathi Cinema. That is a sad thing. His direction is fantastic! This film is one of the best Indian political films I have ever seen. Vijay Tendulkar is a legend, you can see why.

Performances are great as well! Nilu Phule as Digamber, Shreeram Lagoo as Vishwasrao, and Arun Sairnak as Shinde are very very good!

Watch this film to see how Indian politics were in 1979. It hasn’t changed much.