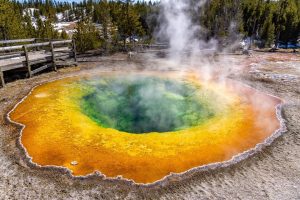 We thought we would go somewhere during the Independence Day long weekend holidays in the first week of July.  We planned to go to Yosemite and the Grand Canyon again as part of seeing the places that we have already seen once in another season.  This time I proposed it would be good if it was a place we had never seen before, then Varu said “Yellowstone National Park”.  “Yellowstone National Park” is one of the world-famous national parks located in the state of Wyoming.  Generally, before going on vacation to such famous places, you have to find accommodation there.  Before we went to Google uncle we hurriedly surfed the website of Yellowstone National Park and started looking for accommodation possibilities.

Generally, the accommodation facilities in the National Parks are varied options. Some are camping sites.  It means that we carry our tent and our belongings ourselves, rent the place there and stay for the number of days booked. I would never prefer camping with children. And some are “semi-camping accommodations” with far away bathrooms. They have accommodation in sheds. Some are in nearby hotels and some are very expensive resorts.

There is no vacancy at Yellowstone National Park for four days as we expected. After a long search, we found accommodation only for two days, and that too, at two different locations. It is very expensive.  However, we booked for two days as we decided to get there by all means and think of it later.  No matter how much we searched, we couldn’t find it for another two days.  For two more days, we booked in private resorts near the National Park. From there the National Park is another 20 miles away.  Yellowstone is not simply at hand stretched from our house. It’s about a thousand miles away.  We have started the travel preparations. As always, the task of planning everything fell on me. I said everything should be executed only after taking the opinion of everyone. I invited them for a get-together.

At first, we thought about other options like driving that far or taking a flight.  If we were to go by car from our house, we would have to go through the sights like Lake Tahoe, Reno, and Carson City respectively.  Moreover, a one-way drive cannot be done in one day, two days are needed for the drive. We may be exhausted with children.

Satya desires for a long-time to travel by train. It’s not either possible from our hometown or our neighboring town Yellowstone; but from Salt Lake City, which is 300 miles away.  Moreover, it takes more time than driving in a car.  Salt Lake City is about 800 miles from our home.  If we go east from California we will come to the state of Nevada.  Nevada is bordered by Idaho to the north, Wyoming to the east, and Utah to the south.

But overall, crossing the state of Nevada is a big journey.  Salt Lake City is a historic city that straddles three states, even though it is in the state of Utah, a place worth seeing.  That’s why I came up with a great idea.  If we fly from our hometown to Salt Lake City, rent a car, and travel around the neighboring states, we will have time to fly anyway, and then have the patience to drive around all day. A flight ticket is the same as a train ticket.

Varu felt about this idea, “We all have to agree whether we like it or not”.  Because time is very important for us.  Satya has very limited holidays.  However, a week-long plan was prepared. We booked the flight, per head 200 dollars to and fro fares. We read the reviews online and see which car rental company is the best and book the car from that company. We used to drive regular cars and SUVs so this time we booked to drive a mid-size jeep. It comes to around 500 dollars a week including rent and petrol.

I read out the plan to all. “-We will take a 9:00 pm flight on Friday and arrive in Salt Lake City at midnight.  We will pick up the car at the airport and go to the hotels. We will spend the whole of Saturday on a Salt Lake City tour, and on Sunday morning we will take a scenic route through neighboring states and arrive at the hotel outside the entrance of the National Park in Wyoming in the evening.  Leave on Monday morning and go to the National Park and stay there for the night, check the other features and stay at another resort inside on Tuesday, and on Wednesday start the return journey and visit the neighboring states through another route and come to Salt Lake City for the night and stay there.  If we return for the 6 o’clock flight the next morning, we will reach home by 9 a.m. Satya can go directly to the office on the same day-“

As per my plan, when all the hotels were booked, I assigned Varu to prepare a guide, do some research, and prepare notes with printouts for visiting the National Park.  It is usual for me to pack everyone’s luggage. All these are planned for twenty days, and we prepared with a newly bought camera. We reached San Jose Domestic Airport by taxi at 6 pm on Friday. Komal didn’t follow us. We suddenly remembered after reaching the airport that the camera charger was left at the charging outlet at home with batteries. So it won’t work. We should have to buy the charger and batteries in Salt Lake City again. Meanwhile, it’s announced that the flight is running one hour late.

I switched over to do something about it and I got on the airport shuttle bus and came outside to proceed home to get back the charger. It takes at least 2 hours, that too if buses are available. The minimum fare for Tax is 100 dollars. I suddenly remembered Komal and called him. He started immediately from home and suggested that I go back to the airport. Children began to demand something to eat though it was hardly 7 pm. But they are stubborn.

This time the journey started with a bad omen. There is nothing to eat at the airport departure point except a few snacks. I called Komal again and asked him to bring us some pizza and water on the way.  By 9 o’clock, Komal brought all these. As the flight was postponed to 10 o’clock, we had the time to set right all such things. We ate in a hurry and rushed inside.

On this journey, we have decided to take a car seat from home for Siri. Most rental cars have special rental car seats for children. But we read online that instead of paying rent for that seat, a new car seat is easy to buy. We bought a folding cart with wheels to carry the car seat on the flight.  Apart from hand luggage, if you carry large suitcases, you have to pay an extra charge to domestic airlines.  So we just pack all our luggage in suitcases that we can take with us into the cabin.  And Siri’s Babycare should be included. Our luggage has increased due to many such additions.  Just before leaving, Satya looked at our luggage and exclaimed, “Amma baboy!” Varu should also have to drag the luggage this time. We got on the plane at the airport and breathed a sigh of relief as everything went smoothly.