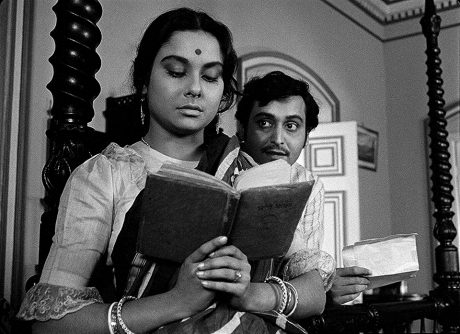 Soumitra Chatterjee collaborated with Satyajit Ray on 14 films. They were like Marcello Mastroianni and Federico Fellini, Toshiro Mifune and Akira Kurosawa, and Tony Leung and Wong Kar-Wai.

Charulatha is a film directed by Satyajit Ray based on a novella called Nastanirh (Broken Nest) by Rabindranath Tagore. It premiered at the Berlin film festival, Satyajit Ray won the Silver bear for the best direction. This film also won the National award for the best film in 1965.

I did not want to repeat my directors till I exhaust the maestros. I also did not want to write about a film in the same language twice in a row. With Soumitra Chatterjee passing away, I wanted to do a tribute article for him.

Charulata was not a film I wanted to do for this series. Every art film lover knows this film, and has seen it multiple times. This film is considered Ray’s best and has been written about a lot. I picked this film only because this is the film that made me Soumitra Chatterjee’s fan. This is my way of paying tribute to my favorite Indian actor.

Both Satyajit Ray & Rabindranath Tagore need no introduction to people around the world. Tagore won Nobel prize for literature. He is the only Indian to have that honor for literature. His works have been translated into various languages. Ray has adapted a few novels of Tagore. Charulata and Ghare Baire are the most noted ones.

The film is set in the year 1879 in the city of Kolkotta, known as Calcutta in those days. The film opens with Charulata (called Charu) embroidering a handkerchief with letter B, to give it as a gift for her husband Bhupati. After she is done with embroidery, she takes opera glasses and observes the street from the upstairs. Bhupati is a rich person who runs a newspaper. Nothing but politics interest him. He is busy with his newspaper doesn’t have much time for his wife. Charaulata is interested in arts and literature. She likes to observe different things with her opera glasses and is gifted with words. Charulata’s brother Umapada arrives along with his wife Mandakini to help out Bhupati with his business.

Bhupati’s cousin Amal arrives to spend time after finishing his college. He is an aspiring writer. Bhupati asks Amal to bring out the talent in his wife Charu. Amal develops friendship with Charu. She has more in common with Amal than her husband Bhupati. She gets jealous when Amal pays attention to Mandakini. Charu slowly falls in love with Amal. Amal reluctantly reciprocates. Umapada steals from Bhupati and runs away. Amal overcomes with guilt and leaves. The sadness ensues, resulting in a heart breaking end.

Charu is a lonely wife who is interested in reading. She is very smart. Her friendship with Amal starts with their mutual love for literature. She gets possessive and wants Amal and his writing for herself. Amal is her playmate and a close pal. There is no indication in the film that their relationship has ever been consummated. The love is shown through guilt of Amal in presence of Bhupati. In the book there is love, but no intimacy. Her relationship with her husband falls apart partly because she doesn’t know what to do with him.

Amal is an aspiring writer. He is close to age of Charu. They friendship grows and blossoms into love. In the book he is intimidated by Charu’s intelligence. In the film there is no indication of that. He leaves mostly because of guilt.

Acting in the film top notch is an understatement. Soumitra is fantastic as Amal. He is playful in the beginning of the film and feels guilty about his feelings for his cousin-in-law Charu in later half of the film. You can see what is going on in his mind through his face.

Madhabi Mukherjee is one of the finest actresses ever from India to grace the silver screen. Her boredom, love, and jealously are shown through her face. It is her film from the beginning to the end. Shailen Mukherjee as Bhupati is also fantastic.

The film has some iconic scenes. The opening scene of the film where bored Charu looking outside through her opera glasses is one of the most interesting openings in the Indian cinema. Also Charu swinging while singing and we her her view point along with her, is fabulous. Camera uses shadows very effectively through out the film. The cinematographer Subhrata Mitra is fantastic as ever!

This film is my tribute to Soumitra Chatterjee. Watch it because it is an experience like no other.