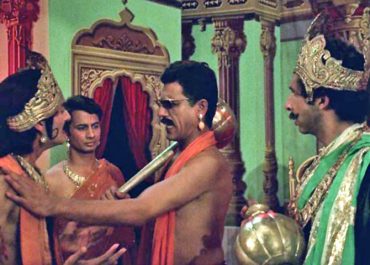 “Corruption and hypocrisy ought not to be inevitable products of democracy, as they undoubtedly are today.” – Mahatma Gandhi

Jaane Bhi Do Yaaro is a film directed by Kundun Shah. He also co-wrote the script with Sudhir Mishra. The film released in 1983. Kundun Shah won the National Award for the Best Debutant Director for this film. It ranks among the best black comedies from India.

Kundan Shah was a graduate of Film and Television Institute of India, Pune. Jaane Bhi Do Yaaro is his first film. He directed 2 acclaimed Doordarshan (National Channel run by the government of India) series Nukkad and Wagle Ki Duniya. His Kabhi Haa Kabhi Naa starring Shahrukh Kahn was another well known film.

This film is produced by the National Film Development Corporation.  This agency was setup in 1975 to encourage high quality Indian cinema. NFDC provides a lot of services from financing to distribution for film makers. They played a huge role in fostering the Parallel cinema of 1970s and 1980s. They produced around 300 films. Many of those went on to win several national awards.

The film opens with Vinod Chopra and Sudhir Mishra waiting for guests to open their photo studio. A competitor who is opening another studio on the same day sabotages their opening. Demand for photography is low. Vinod and Sudhir don’t have many means to pay rent or fend for themselves. Their studio is right across a newspaper office. The newspaper’s editor Shobha Sen is interested in dealings of a construction company headed by a person called Taneja. DeMello is the commissioner of Bombay (now Mumbai). He is responsible for building permits and construction projects in the city. He is corrupt, and helps Taneja and Taneja’s rival Ahuja by taking money and other favors from them.

Shobha editor recruits Vinod and Sudhir to dig dirt on Taneja. Shobha doesn’t pay any money to Vinod and Sudhir. Having no finances, they decide to take part in a photo contest. A photograph taken by Vinod captures the scene of Taneja shooting DeMello. They take these pictures to Shobha, who decides to blackmail Taneja. During this time a Flyover built by Taneja collapses due to poor construction quality. What results is a chaos and the ending you expect from a black comedy.

The film is set in 1982. That period in India was at the height of license raj. One needed permits to build anything. At that time cement was rationed. Buildings were collapsing overnight due to poor quality construction. The corruption was rampant. A.R. Antulay then chief minister of Maharashtra resigned after he was convicted for taking bribes for distributing cement which was strictly controlled at that time. The announcement of this incident is shown in the film.

The film is very funny! It satirizes the license raj, and the greedy construction companies trying to make a fortune on Bombay’s growing affluent population. It also explores the corruption in the administration which wants bribes for everything. Another angle explored is the nexus of the newspapers, the police, and the construction companies working together to protect the interests of the wealthy, while the common citizens pay the price.

Taneja is cold and calculating, where as Ahuja is a loud drunk lout. Contrast between these two characters plays well in the film. Especially since they are played by two of the greatest actors of Hindi cinema. Taneja has assistants to do his dirty work; Ahuja is a lone wolf. They both are smart enough to manipulate the officials to their advantage.

Shobha is a greedy newspaper editor who manipulates Vinod and Sudhir to work for her without paying them a paisa. Though she acts as if she is running a honest newspaper, she is just a blackmailer. The officials are all corrupt, they change the rules once they get their price.

Vinod and Sudheer are good photographers who don’t have luck to breakthrough even though they are talented. They become scapegoats in the larger scheme of things.

The film takes a part of its story line from Michelangelo Antonioni’s Blow Up. They paid homage in naming the park where the murder takes place as Antonioni park.

Acting this film is top notch. Pankaj Kapoor as Taneja is fantastic! Om Puri as Ahuja is another great performance from a great actor. Om Puri was loud and hilarious as Ahuja. Naseeruddin Shah and Ravi Baswani were excellent!

Bhakti Surve as Shobha, Satish Kaushik as Ashok, and Neena Gupta as Priya were very good as well!

The film has to no songs, the background music by Vanraj Bhatia is very good!

Editing by Renu Saluja is excellent! There is no unnecessary scene in the film.

This film is a riot due to the dialogue penned by Satish Kaushik and Ranjit Kapoor. The dialogue has you in splits.

Watch this film to get a peek into 1980s India and laugh out loud. This is inarguably one of the best black comedies in India.