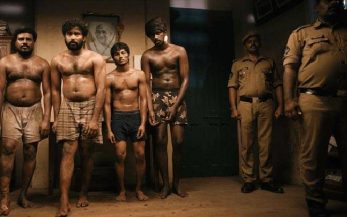 Between 2011 and 2019 there were about 860 recorded deaths at the police stations in India. In all likelihood they are underreported. Zero police officials got convicted for these deaths.

Visaaranai is a film made by the director Vetrimaran based on the novel Lock Up by M. Chandra Kumar. This film premiered at the Berlin Film Festival in 2015 where it won the Amnesty International Italia award. It also won the National Film Awards for the Best Tamil Feature Film, the Best Supporting Actor for Samuthirakani, and the Best Editing for Kishore Te. It was India’s official entry to the 2017 Oscars.

Vetrimaran started his career with the film Polladhavan in 2007. His next film Aadukaalam won several awards including 2 National Awards. His other films Asuran and Vada Chennai were also critically acclaimed.

Police in India do not have a good reputation. They are rarely trusted. Political influences make this problem even worse. I personally know a case where the police refused to help when a powerful politician’s relative squatted in a house when the owners were away.

Police brutality is also very common. Complaints are rarely investigated. In a few cases cops under intense pressure to solve a case try to pin the crime on whomever they can find. It is mostly the marginalized groups that pay the price. There is not much of a legal recourse as it is very difficult to get legal representation and cases in courts are seriously backlogged.

There are a few films that talk about this issue. Arthsatya, Ankuram, along with this film are a few well known ones.

The film opens with Pandi cleaning himself up in a public bathroom. Pandi, Murugan, Afsal, and Kumar are migrants from the state of Tamil Nadu living in the town of Guntur in Andhra Pradesh. They take up jobs at different places to fend for themselves and live in a public park. Pandi works at a corner grocery store. The city police pick them up and take them to a police station. The police start torturing them without giving them a reason. The guys realize that they are being framed for a robbery at a highly placed official’s home. The officer in charge is under pressure to solve the case, so he wants to make Pandi and friends scapegoats. When presented in the court Pandi tells the judge that they were tortured to confess. A police official called Muthuvel from Tamil Nadu helps Pandi and his friends get acquitted by translating their plea from Tamil to English.

Muthuvel recruits Pandi and his friends to kidnap a white-collar criminal named K.K. who knows too much. K.K. is an accountant who works with important people including politicians. The police of Tamil Nadu wants to use K.K. by baiting him to the politicians right before the elections and make as much money as possible. K.K. realizes that his life is in danger if he out of the jail. He wants to talk. One of the cops who wants to shut him up tortures him to death. His death is then framed as a suicide. Now the police do not know what Pandi and his friends know about this affair, and that could be costly to them.

The film is divided into two parts. First part deals with the Police of Andhra Pradesh. In this episode Pandi and his friends are picked up. To make the matter worse they don’t understand the local language (Telugu) very well. The Inspector of the station is under serious pressure, as the case is covered in the press every day. He just wants to pin on innocent people to get the officers off his back. There is also a phone call he makes asking for money but it is not clear what it is about. Pandi and his friends make just enough to make ends meet, sleep in a park and are clearly innocent. Pandi is shown to be courageous and honest. He stands up for his friends more than once.

The second part deals with the police in Chennai and the nexus of the police and the politicians. Their motivation is to bait K.K. and sell him to the highest bidder. As elections are near, the secrets that K.K. holds are important to both the ruling party and the opposition. This part also shows contrast in the way the police deals with the wealthy  vis-à-vis the poor.

The film is essentially about police brutality and how police operates for their individual financial gain rather than doing their real duty. The film has a lot of violence. There are several torture scenes. There is also a claustrophobic feel to the film. It is shot in very close corners and in cramped places except for a few scenes. Camera work by Ramalingam is excellent.

Performances in the film are fabulous. Especially Samuthirakani who played Muthuvel and  Dinesh who played Pandi. There are a lot of characters in the film who play cops, but we don’t have to understand them. This is a plot driven film rather than character driven.

The direction is very good! Vetrimaran is considered one of the finest in India and this is film is good example why. The film is very natural.

Editing of this film is excellent! There are no scenes wasted. Every scene contributes to the film.

Watch this film to get a peek into corruption of police. It is a pretty compelling thriller.