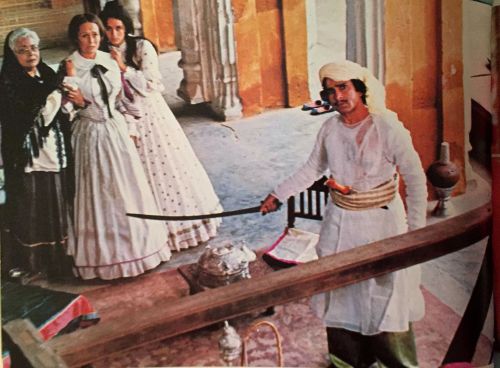 The 1857 rebellion against India also known as the first war of independence had ended the reign of East India Company and started the reign of Queen Victoria as the empress of India.

Shyam Benegal started his career as a copywriter at an advertising agency. His first film was Ankur which shows life under feudal Telangana, a theme he revisited in his another film Nishant. His other famous films are Manthan, Mandi, and Bhumika. His films won the National Award for the Best Hindi Film seven times. He was also honored with Dada Saheb Phalke award which is given for significant contribution to Indian Film Industry. He taught at the Film and Television Institute of India, Pune. He is the cousin of the illustrious film maker Guru Dutt.

Ruskin Bond is an Indian writer of British descent. He wrote in English. His stories are mostly set in the Himalayan region where he lives. He won several awards for his writing. Most Indian children grow up reading Ruskin Bond and R.K. Narayan. A Flight of Pigeons was inspired by a story that Ruskin Bond’s father heard as a child.

1857 was the year of the rebellion against the British. There were several causes for this rebellion. The East India Company trying usurp more native kingdoms, cartridges with beef and pork, and some social reforms enacted by British. The rebellion was mainly concentrated in the Eastern, Northern and the Central India. The rebellion was brutal with atrocities committed. 6,000 out of 40,000 the British living in India were killed. Hundreds of thousands of Indians were tortured, raped and killed.

The film is set in 1857 during the First war of Independence. The opens with a Qawali (religious singing)  at a mosque. At this time a man named Javed, passes the Mosque. A seer tells Javed that there will be a lot of blood. Javed is obsessed with an English teenager called Ruth Labadoor. Ruth has a Muslim grandmother. A group of rebels led by Javed’s brother-in-law Sarfaraz Khan attack the local church and kill all men present in the church. Ruth flees the church to get help, but her mother Miriam and grandmother have left the home with the help of a man called Ramjimal who is a local merchant. Ramjimal gives shelter to the Labadoors despite of his family objecting to it.

One day when Ramjimal is away Javed abducts the Labadoors and takes them to his home. Javed wants to marry Ruth. Javed is already married to Firdaus who is childless. She does not like the idea of Javed marrying again, but there is little she can do about it. When Javed tells Miriam that he wants to marry Ruth, Miriam tells Javed that he can marry Ruth if the British lose in Delhi.  Experiences of Labadoors and the history of rebellion form rest of the story.

One of the main themes of the film is the effect of war on lives of women. This is relevant even today for people who live in the conflict zones. The Labadoors are in a situation where they had no man to help them. If they go out, they could be killed or raped. While Labadoors were sheltering at Ramjimal’s home, a rebel soldier sneaks into the house. Miriam kills him by using the knife she keeps under the bed. This situation is probably common in conflict zones.

Characters in this film are quite strong. Javed does not seem interested in the war or its causes. He is selfish and wants Ruth. He is consumed with his obsession and does not care who gets hurt. Miriam is smart and strong. She tries to support and save her family against all odds. She doesn’t hesitate to kill or make a deal just to delay a problem.

Ruth is still a teenager, she is more of an observer in this madness. Javed’s aunt provides the voice of reason in the film. She is rational and empathetic. Her son Khader is an idealist. He is a rebel as well, but does not support harming the innocent. Safaraz Khan the brother-in-law of Javed is a rebel leader and is consumed by his cause.

Though the plot is same as that of the book, there are a few differences.  In the book Javed is a brute and likes to live his life dangerously. His character is significantly softened in the film. In the novella the story is narrated by Ruth. In the film barring a few scenes, Ruth is pretty passive.

Acting in the film is very good. This is one of the better performances by the lead actor Shashi Kapoor who played Javed. He has terrific screen presence. However the film belongs to Jennifer Kendel who played Miriam. She is a powerhouse of performance in the film! Her scenes and tension between Javed played by her real life husband were really good. Naseeruddin Shah who played Sarfaraz was terrific as well! The great Urdu writer Ismat Chugtai played Miriam’s mother. It was good to see her on the screen.

I like Vanraj Bhatia who gave the score to the film. The background score film is pretty average. One song sung by Mohammad Rafi was unnecessary. Editing could have been crisper.

The dialog penned by Satyadev Dubey and Ismat Chugtai is very good! Cinematography of the film is excellent!

Watch this film for glimpse into 1857 war that changed the course of British Empire, the conflict and terrific performances.