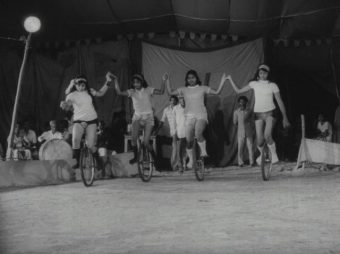 “The circus comes as close to being the world in microcosm as anything I know; in a way, it puts all the rest of show business in the shade.” – E.B. White

Thampu is a fllm made G. Aravindan. He also wrote the screenplay for this film. This film won Best Director at the National Awards. It is also won the Second Best Film, and the Best Director  at Kerala State Film Awards. It is the debut film of the great actor Nedumudi Venu who passed away recently.

This film is my tribute to Nedumudi Venu. He started his acting career in the theater. He was one of the few actors who was successful in both arthouse and in commercial films mostly as a character actor. He acted in more than 500 films in his five decade long career. He is one of my favorite actors.

The film opens with people traveling in a truck. These people are circus performers. They are going to a small town to perform there. The whole town is excited. Kids run to look at the monkey, and the leopard. The whole town gathers to see what they are doing. They set up the tent and advertise heavily. The circus company is suffering financially. They need to make this a success in order to survive. Beedi Menon owns a construction company. His son Unni is estranged. Unni is interested in music. He spends most of the time out of the home learning music and sleeping under a tree.

Menon inaugurates the circus, a lot of people show up to watch it. The performance is a huge success. The circus performers become minor celebrities in the town. People follow them wherever they go. A local driver befriends the performers. Local kids go the tent to see what the performers are doing.

Most circus performers join the circus when they are young. Even children work and send money to their families. Life in circus is hard and tiring. They perform two shows a day and spend rest of the day practicing. Even if they wanted the performers cannot leave because this is the only world they know. A local festival starts affecting the circus attendance. They cannot get more audience even after they change their routine. They have to finally leave.

The film is as much about the village as it is about the circus and the performers. Though we don’t get much insight into the characters in the village, we get a glimpse of their daily life.   Only Menon’s character is some what etched. Menon is unethical, his business practices are questionable. He is an alcoholic, which is probably the reason why his son Unni is estranged. Unni decides life in circus is better than the world he lives in, which is a circus in itself.

The film is shot in documentary style is heavily inspired from Italian neorealism. Most actors are not professionals. The film has long shots of performances of circus and the audience. The expressions and awe of the audience leaves us in awe! Aravindan is a maestro, his films are an experience, so is this film.

Nedumudi Venu as Unni is excellent! He shines in his scenes and is a delight to watch. He is an accomplished mridangam player, which helped him in some scenes. Bharath Gopi as circus manager is fantastic as well! Aravindan drew out great performances from the non-professional actors.

Shaji N. Karun’s cinematography is amazing! Every scene in the film is fabulously framed and shot.

Music plays a very important role in the film. It is a character in itself. Aravindan was trained in Hindustani music. Score and music by M.G. Radhakrishnan is very very good!

Watch this fantastic film to see the maestro Aravindan at work and also for Nedumudi Venu who is a delight.