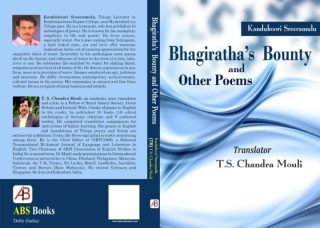 Bhagiratha’s Bounty and Other poems-12

As one ambles across water
if it’s a well or ditch is unknown
impact of cyclone tall column of water,
residence looks like an island in ocean;
mother and daughter at home
like cow and calf tethered to the stake,
father holds chill heart in hands
atop Himalayas far away.

Mother and daughter repeat requests
on mobile phone asking him to reach them
whale of cyclone choked the town
with incessant rain
gushing as a river.

Father scans every inch on T.V.
to locate mother and daughter.

All around on the ground
enveloped a thick cloud of smoke,
in entire town of Bandar
grass of water sprouted
like numerous mats spread out,
tall column of water appears as
vipers entwining neck.
Flood is like sky tumbling from
snouts of hungry crocodiles,
it was like rain drops drumming
on bosom of water.
Water that slaked thirst
may recede treacherously!

Lonely residence like the moon
lunar eclipse darkens every inch,
just mother and daughter at home
no saviour in sight,
huts around could not stand fury of flood
twinkling folks vanished from there.

Unremitting rain from the past five days
paths from sky palpable
not ways to steer across land.

Power supply halted
no potable water from pipes,
essential provisions scarce,
not a tumbler  of water to drink,
over flowing drainage water
unfit for use even in toilets.
Mosquito menace
swarming flies
all localities in town turned into ships in sea
to reach bus station use of boats imperative
none to get boats.
Somehow they were fetched
no boatman in sight
not one or two…five kilometres
wading in water one should reach a bus,
father is far away
not one or two…five hundred kilometres distance

Rain continued
water level swelled
neck deep water…
he went into the home wading through the water in street
hoisting her daughter on his shoulder
holding her with one hand
slowly moving
like an aged person he was.
He advised her to be wary of ditches
and walk in the middle of road.
He held two lives in two hands,
wading through water for half a kilometre
was like walking sixty kilometres on ground;
having covered the distance
reached a road in knee deep water.
After covering five kilometres distance
was available a bus bound for Vijayawada.

Funds are there in bank account
insufficient to meet expenses at that moment
auto rickshaw driver volunteered to help.

He was the same one dropping the girl at school daily.

With sodden clothes they boarded bus
from Bandar the bus started.
Mother and daughter sat clutching to one another
scare of bus halting midway haunted
feet of water on either side of bus
icy cloud still melting
unknown fear of bus skidding
feeling of bus dissecting a sea
holding precious lives precariously
after travelling six hours to cover
one hundred kilometres
finally feet landed on terra firma.
As though a battle was won
Vijayawada bus station beckoned bewitchingly.
Made one rupee call to Hyderabad from telephone booth
‘we escaped death to land with life,
leaving by bus available now.’
Then only drenched clothes dried up
emotionally charged spirits for the last five days …

How many families
were agitated
how many lives wriggled
how many breathed their last
certainly unknown
to the visiting cyclone and heavy rains
to the whistling whirl wind
to the administrators!

If only one walks on terra firma
undulations are palpable.
To step on the road
land should be there,
heavy water logging, a tall column
stepping on water logged ground
one may not know whether it is pool or well.