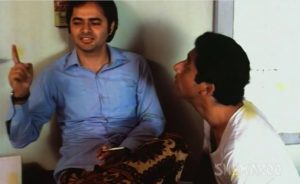 “Being a nice person is about courtesy: you’re friendly, polite, agreeable, and accommodating. When people believe they have to be nice in order to give, they fail to set boundaries, rarely say no, and become pushovers, letting others walk all over them.” – Adam Grant

Katha is a film made by Sai Paranjpye based on a Marathi play by S.G Sathye titled Sasa Ani Kasav (The Hare and the Tortoise). This film won the National Award for the Best Feature Film in Hindi.

Sai Paranjpye is a graduate of the National School of Drama. She started her career in AIR as an announcer. Her first feature film was Sparsh, which won the National Awards for the Best Screenplay and the Best Feature film in Hindi. She also directed a few TV series. She has written and directed plays in Marathi, Hindi, and English.

I couldn’t find any details on S.G. Sathye.

A chawl is a type of residential building that can house several families. Most units have just one room. These were originally built to house industrial workers during the colonial era. When real estate in Mumbai became very expensive, many chawls were occupied by middle class families. These days one can see them only in low income neighborhoods.

The film opens to a grandmother telling the story of the hare and the tortoise to her grandson. But according to her story the tortoise loses in the end. Rajaram is comes home happy that day. His job has become permanent. He brings a name board with him to hang on his door. Rajaram is a nice person. He helps people even when it is very inconvenient for him. People take advantage of this nature of his. Rajaram likes Sandhya who is his neighbor. Due to Rajaram’s shy nature, he couldn’t express his feelings to her.

One day Basudev comes to visit Rajaram. Basu convinces Rajaram to let him stay as a paying guest. Basu knows to how to charm people. He is a grifter. He talks people into doing things for him. He impresses Rajaram’s boss and gets a job at Rajaram’s company. Basu also starts an affair with the boss’s wife and daughter. Now he wants Sandhya as well.

The film is not just about Rajaram, Basu, and Sandhya. It is about community living, politics, and relationships. The chawl life is not romanticized, but is realistic. People are helpful to each other. But they are also petty and quarrelsome. There are quips about the politics and censorship of those days in the film. It also shows contrasting lifestyles of the rich and middle-class.

Rajaram is too nice for his own good. He doesn’t speak up when he needs to. He does more work at his company than any other person. He cannot kick his friend Basu out when he steals his money, and he knows Basu lied to everyone.

Basu is an out and out grifter. He has absolutely no ethical qualms. He takes  advantage of everyone he meets. He tells everyone that his family is very wealthy in Indore, and he returned from England because he loves India. He agrees to getting engaged to Sandhya even though he has no intention to go through with it.

Sandhya has just completed college, she is a nice person. While is she is friendly with Rajaram, she is oblivious to his feelings. She is attracted to Basu because of his outgoing nature.

Sai Paranjpye is one of my favorite film makers of Hindi cinema. Her films make a point without being heavy handed. She is excellent at capturing the middle-class dynamics. There is a scene where while the kids playing cricket, the ball hits and breaks a pot in someone’s house. The woman of the house cuts the ball and throws the pieces back to at the kids. Another woman gives them another ball to play with, but the ball ends up hitting her head, making this woman mad. This scene is absolutely brilliant!

Performances in the film are excellent! Naseeruddin Shah as Rajaram is very good. He nailed the character with his excellent body language. Farooq Sheik as Basu is a revelation. He always played nice and soft characters. In this film he is the charming villain. He was fantastic! Deepti Naval who played Sandhya is as good as usual.

The film’s Camera work is good! The music is fine.

Watch this film for it is satire at its best!