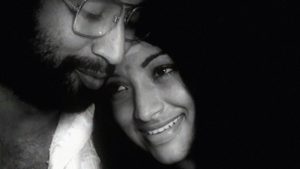 “I remember one desolate Sunday night, wondering: Is this how I’m going to spend the rest of my life? Married to someone who is perpetually distracted and somewhat wistful, as though a marvelous party is going on in the next room, which but for me he could be attending?” ― Suzanne Finnamore

Prayanam is a film directed by Bharathan and written by P. Padmarajan,  The film won the Best Child Artist, the Best Cinematography (Black-and-white), and the Best Art Direction at the Kerala State Film Awards.

Bharathan started his film making career as an Art Director with the film Chembarathi. Prayanam was his first film as a director. Bharathan is crediting ushering a new wave in Malayalam films by making commercially successful films that are critically acclaimed. Some of his notable films are Rathi Nirvedam, Thakara, Thervar Magan, and Aavaram. He had a long collaboration with screen writer and director P. Padmarajan.

The film opens with Appu bathing in a river. His neighbor Ammaniyamma helps him to dry. Appu asks her when his father will be back. Appu’s father is in another village getting married. His bride Savithrikuttykutty is several years younger than him. Appu’s father works as a priest at the local temple. The day after the wedding night, he can not concentrate on the rituals as he is preoccupied by the night before. The local people tease the priest about his new bride. While Savithrikutty bonds with Appu, the priest decides to maintain his distance from Savithrikutty.

Aravindan arrives from town to visit his uncle. He had a troubled childhood. His relationship with his mother is broken. Restless, he travels around the country and finally comes back to his uncle. He sees Savithrikutty at a performance and finds her attractive. Savithrikutty and Aravindan become friends. Savithrikutty becomes sympathetic to Aravind after hearing his story. They start having an affair. One day Savithrikutty’s husband sees her with Aravindan.  The aftermath forms the rest of the story.

Savithrikutty is young, she has certain desires in her life. She is not educated, and is not well versed with ways of the world. She is distraught about her husband’s negligence. This makes it easy for her to gravitate towards Aravindan.

Aravindan has serious mommy issues. His mother was unconventional, alcoholic, and didn’t  provide much care for her son. He has issues relating to people and women in particular. Even though he travels around the world, he doesn’t find peace. Savithrikutty is a person who is willing to listen to him. He does not want to lose her.

Savithrikutty’s husband is a typical male. He cant think of anything but himself. He is hurt by his wife’s infidelity, but doesn’t acknowledge that he is partly to blame.

Savithrikutty’s father is an interesting character as well. He understands what her daughter has done and is sympathetic to her. He is upset with Savithrikutty’s husband who was his student. He doesn’t want to send Savithrikutty to her husband’s house unless her husband apologizes to him.

Performances are excellent! N. Sridharan Nair as priest was very good! Mohan Sharma as Aravindan and Lakshmi as Savithrikutty were good as well! Master Raghu as Appu won the well deserving award for his performance.

Bharathan’s direction is very good! There is a scene in Aravindan’s hostel (dorm) room where the focus is Camus’s book “The Outsider” the camera moves to Aravindan showing his problems with relating to others.  The film is about sex in someways, but it is not salacious.

Padmarajan’s screenplay is excellent! There is no scene that is unnecessary. Balu Mahindra’s cinematography is excellent and his win is well deserved. Background score and music were good! While the songs were good, they don’t add much to the film.

Watch the film to take an interesting look at relationships.