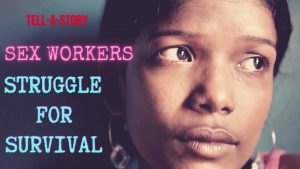 Covid-19 has impacted many but the sex workers across the globe have been the worst affected. The entire industry has come to a standstill amidst the protocol, with their livelihoods at stake. Most of them are at the verge of starvation and struggling to make their ends meet.

Alarmingly, there are over 8 lakh sex workers in India. Spread across eight large red light areas and over 16 small clusters scattered across the country. The lockdown and covid norms has made thousands of them penniless prone to deplorable conditions. The social stigma and descrimination deny them basic moral support or cooperation from the nearby communities.

With no proper government documents or basic identity records like adhaar card and ration card, the community does not qualify to even avail any of the government subsidies, released during the pandemic. Majority have failed to pay rent for months and are threatened of eviction by rowdy landlords. With school going kids and family to support at their hometown, the plight is daunting, leaving them helpless.

Abandoned at the mercy of various Non-Governmental Organizations (NGO), their ordeal for basic needs is horrifying to note. In Oct 2020, National Human Rights Commission (NHRC) proposed to recognize sex workers as ‘informal workers’. However, many organizations came forward citing the risk of decriminalisation of prostitution. After a month-long legal battle, NHRC advisory, which was issued by a panel to discuss the impact of Covid-19 on the human rights of women sex workers, included them under the section – ‘women at work’. But whether the provisions under the government scheme would reach them in time remains a question to ponder.

Not just in India, the sex workers worldwide are among the hardest hit in pandemic and continue to suffer destitution. Unknown to many, March 3 is the International Sex workers rights day. In 2001, over 30,000 sex workers in India staged a protest to raise awareness of their rights. Organised by the Durbar Mahila Samanwaya Committee, they gathered in Calcutta for a festival despite efforts from prohibitionist groups who wanted to revoke their permit. The event had a huge impact globally and since then sex workers across the world commemorate the day every year. Programs are organised to spread awareness about the abuses sex workers face and their human rights violation.

This year, unfortunately it’s their fight for survival. In the wake of International Sex Workers Rights Day 2021, Tell-A-Story unveils the appalling story of Indian sex workers, the hidden truth and the harsh reality behind the red light areas of India.