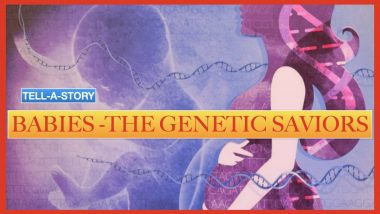 Genetic Engineering has always been a promising field of science right from its inception. But to advance to a level where babies can be designed before conceiving, is definitely fascinating to note.

Known as Designer Babies, their genetic makeup is pre-selected and altered to serve a purpose as needed. Using pre-screening and gene editing, many such babies have been created so far to save families. Conceived to save siblings from rare genetic disorders, they are also termed as savior siblings.

It’s been 20 years since the first designer baby was born to the Nash family from Denver, Colorado, but the news is still a miracle to many. Adam Nash was conceived for his stem cells from the umbilical cord, which was later used for the life saving treatment for his sister suffering from Fanconi’s anaemia. The controversial decision though saved his sister from the rare genetic disorder, it triggered an ethical battle and the family still continues to fight the backlash.

Many questioned them for the motive of conception and few demanded explanation for challenging Darwin’s theory of evolution. Scientists continue to fear the consequences that may evolve in future as the technology develops and gets adopted by the masses.

The success of the first designer baby opened doors for many families that have a legacy of rare inherited genetic diseases. Since 2000, many countries have emulated the technology to save families. India had its first savior baby in 2018. Kavya Solanki, conceived to save brother Abhijit from a rare blood disorder, thalassaemia major.

This powerful technology involving alteration of DNA sequences and modification of gene function is known as CRISPR technology. In-vitro fertilised embryos are genetically screened using preimplantation genetic diagnosis to find the one embryo that would be a potential bone match for their older siblings. Following which, the genetic makeup is selected or altered, often to include or remove a particular gene or genes associated with a disease that runs in the family.

Though benefitted a few, scientists fear the rise of an elite class of genes created with illegal intentions. Gender diagnosis, trait preferences, the endless list of alarming consequences goes on; that may pose a major threat. Few scientific researchers have also raised concern over the health risks to human species with such creation of future generations.

Tell-A-Story sheds light on this unique technology and its prospects, while sharing the experiences of those families who have had designer babies, as they talk about the backlash, the need and question of consent of the newborn. The video story also addresses the legal framework, future implications and what lies ahead! You can watch the story in the video above.