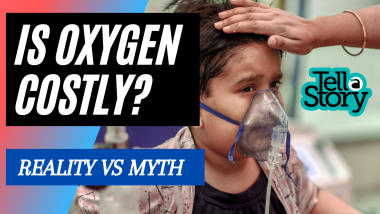 Is Oxygen Costly or Is It A Global Crisis Overlooked?

It is appalling to see such a colossal struggle for the air we breathe. If someone would have suggested ten years back that oxygen would soon become an essential medicine that is scarce and needs to be carried with you for emergency care, we would have brushed aside the idea as bizarre. Unfortunately, it’s a reality now faced by billions of people around the world.

Covid-19 second wave has toppled the crux of the global healthcare system especially in India. With over 2 lakh new cases reported and over 3000 deaths per day, the unforeseen repercussions have aggravated to boundless limits, leaving the Indian population daunting and vulnerable. The unprecedented swarming of patients, disorganized vaccination drives, and obstinate ignorance to severity of the issue, has left the medical sector impotent with lots to do with nothing much in hand.

The scenario is not just limited to India but over 20 countries across the globe, who are facing the same music. And the prime concern is the dire need for oxygen, which is vital for the recovery of Covid-19 patients. India requires nearly 16 million cubic meters of oxygen per day, meanwhile the global oxygen unmet needs have tripled over the last four months from less than 9 million cubic meters a day to more than 28 million. And the dramatic shift did not happen fleetly, lethal oxygen shortages had hit many parts of Brazil, Mexico, South Africa, Afghanistan early this year.

Unknown to many, global health experts had raised a red flag much before the pandemic. Oxygen production, supply and access was never prioritised and left long-neglected from the entire health system planning process. Even though oxygen plays an indispensable role in emergency treatments for pneumonia, accident trauma, childbirth, and many other medical procedures, hardly a few hospitals across the world are self-equipped to provide oxygen to a patient by his or her bedside. There is a dearth for oxygen storage capacities at hospitals with no proper pipe connectivity.

Though oxygen constitutes 21 percent of the atmosphere and medical oxygen can be harvested directly from the air, the essential facilities are limited and the local governments hardly paid any heed to develop this sector until the pandemic created an emergency. Leaving the destitute patients to hoard expensive options like oxygen cylinders and concentrators, especially when oxygen produced otherwise via plant is 10 times cheaper.

The World Health Organization(WHO) was approached by various countries citing these requirements years before the pandemic even began, but unfortunately no measures were taken. It has now launched a COVID-19 Oxygen Emergency Task Force to measure oxygen demand, secure supplies and provide technical support. Estimates show clamour for immediate funding of nearly US$90 million for 20 countries. It is believed that Covid-19 was just a trigger and the global oxygen crisis is here to stay.

Tell-A-Story brings to you an in-depth analysis of the global oxygen crisis – the emergency faced by 20 countries, how it all began and what needs to be done and the global oxygen task force measures to contain the damage that otherwise could become an unimaginable catastrophe.