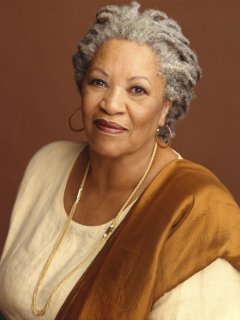 A MERCY – A NOVEL BY TONI MORRISON

TONI MORRISON published this novel in the year 2008. Those who are aware of her previous novels especially BELOVED and THE BLUEST EYE know the unique story telling style of this genius. Most of her stories are in a narrative style and match with the greatest narrative technique of William Faulkner. I do not mean that Toni Morrison exactly copied the style of Faulkner but her style reminds us of the legend.

In this novel Florence who is a slave, living and working on Jacob Vaark’s farm narrates her story. Another Native American Lina also a laborer on the farm tells her story in a parallel narrative. Vaarks’ wife Rebecca comes from England to marry him and relieve her parents of her burden. She talks about her life. Florence was a young girl living with her mother and an infant brother in a far away land. When their master faces some debt in his slave trading business, he offers Jacob Vaark his slaves as a bargain. Jacob Vaark wants to take the mother but he also finds out that the debtor has other interests in the woman and therefore does not intend to trade her. It was then the mother kneels down in front of Jacob and requests him to take the daughter. Florence feels cheated when her own mother chooses her infant brother to stay with her and decides to get rid of her. The insecurity which thus has takes birth in her with her mother’s choice haunts her all through her life.

Jacob Vaark was a poor man brought up in an orphanage. He is not a brutal slave trader but definitely wants to earn good and live a luxurious life. He advertises in a news paper for a bride and Rebecca comes looking out for him following the advertisement from England. She leaves a life filled with insecurity and poverty behind and chooses to get married to the rich man who wants a hard working wife. She gives birth to many children who die as infants. A daughter survives a few years of childhood but she too dies in an accident. Florence was almost the age of their dead daughter when Jacob first sees her, and so he brings her home thinking that her presence may bring some peace to his wife who is not able to get over the daughter’s death. But Rebecca turns cold towards Florence and it is then that Lina comes forward taking Florence into her custody and loves her as her own.

Lina is a Native American girl. Her whole tribe was washed out with small pox and she survives alone learning about a few tribal medicines. She witnesses how the white man has conquered them and almost wiped them out from their native land. She carries this bitterness and always believes that she has been made a slave on her own land by people who have come from far to make money on their land. At the beginning there are hints about intimacy between Jacob and Lina. Rebecca does not like Lina’s presence in the beginning. But while working together they develop a bond of sisterhood and they become mutual confidants.

Lina takes care of Florence and also understands her insecurities. A mason comes from a foreign land who is a free slave and helps Jacob in the construction of his new house. He has an affair with Florence. Florence is attracted towards him and strongly wishes to be with him in the future. Lina warns her about her passion and speaks about how woman are used by men and are left alone with a heart break. Florence does not wish to take Lina seriously and continues the affair. One day when the mason has completed his project he goes back to his land leaving Florence alone and miserable.  Another slave girl called Sorrow also lives on the farm. She was found in a lonely abandoned ship and loses her mind. She is mentally insane and in this stage gives birth to a girl. The father of the child remains a mystery. Lina drowns the infant thinking that it is the only best thing which can be done considering the mental health of the mother. Sorrow is deeply affected by this. When she becomes pregnant again she moves away from the farm during the birth of her child and delivers it with the assistance of two male slaves from the farm. Her child survives and she also is cured of her sickness. She makes her child her only hope in life and passionately clings to it. When Sorrow gets infected with Small pox the Mason cures her with a traditional medicine. After he leaves the place Jacob gets infected and dies suddenly. His dream house remains unfinished.

The next day after Jacob’s funeral Rebecca finds small sores in her mouth and she understands that she also has been infected with the Small pox. Remembering the Mason she gives a letter to Florence and asks her to go to his state and bring him back to cure her. Florence is happy to meet her lover again and takes up the difficult task. She walks through dangerous cities and lanes where blacks are ill treated and in some cases are also murdered. She escapes death when a child helps her to run away while elders assume her to be a witch due to her black skin and blame her for practicing black magic. She finds another black mother who continuously cuts herself and allows the blood to flow to prove to the villagers that she is not a witch. Black woman were considered as Witches and were burnt to death in many parts of America in those days. Finally Florence meets the Mason but is surprised to see him with an infant son whom he has adopted. The Mason leaves the boy with her and goes back to treat Rebecca.

Rebecca is cured and the Mason comes back. The infant son in his house once again reminds Florence of her infant brother and how her mother chooses him over her and discarded her in her child hood. Once again the feeling of insecurity dominates her and she assumes that the Mason is also going to choose this boy and will disown her. In a fit of rage she crushes the boys arm and breaks it. The mason comes back home and kicks her out of the house. He openly says that she is forever a slave and therefore should not dream to be someone’s wife. Heartbroken Florence comes back to the farm. Lina tries to help her but Florence is emotionally shattered and chooses to live alone in the abandoned house and writes her story on the walls.

Rebecca now cured of her disease takes the role of the mistress and starts ill treating her slaves. She also decides to sell Florence to get rid of her.  Money means power to her and that is the only lesson she learnt as a woman who was taught that a rich husband can be the only gate to her happiness. Lina is left alone trying to understand the changes in the farm and comparing it with her struggle for existence right from her birth and enduring the injustice once again in her own submissive way keeping most of her opinions to herself.

In the final chapters the writer takes back the story to Florence’s mother who speaks on her behalf and about the choices she made. She talks about her hard life, the exploitation of the farm and her experiences being a woman. She knows about her master and is helpless being his sexual toy. Since her daughter passes her infancy, she is worried about her security. When Jacob comes to the farm she examines him and with her experience she understands that he is not a brutal man and definitely is not a sexual pervert. She chooses to offer her daughter to him wishing that she may lead a better life away from the farm. And so she bows down and pleads her daughter to be taken away.  This she does not look upon as slavery but as A MERCY shown on a black girl by a half White Man. She loves her daughter the most and therefore wanted her to be away from a brutal master and therefore sends her daughter away.

The novel speaks about the real concerns of Mothers about the safety of their daughters in a severely exploited society. The real intention of this mother can never be understood by Florence and therefore she is scarred for life with her own insecurities which she tries to forget with the men whom she encounters and in turn is emotionally and physically exploited again.  The novel discusses about the lives of women as slaves in the then American society and how the feelings like love and happiness are defined and looked upon differently from each person who has her own experiences regarding exploitation and who tries to protect the next generation but cannot prevent them from falling prey to the brutality in the system called Slavery.

It is an emotional journey which speaks about the lives of four women living in an exploited society. A black slave Florence, a native American Lina,  A poor woman from England Rebecca who dreams that being a wife can be the end to her problems, and finally a refugee Sorrow who loses her mind and only gains it when she becomes a mother. The natural instinct of motherhood is dominated by the brutal society around and therefore the relationship between the mother and daughter becomes a confused harmony. Lina wants to be a mother and finds solace in Florence who does not respond to her due to her past experiences. Rebecca loses her children and fails to shower the same love on Florence and finally decides to sell her. Losing her children one after other hardens her. And Florence’s mother who decides that keeping her daughter away from her is the only way to protect her. The natural instincts of a woman are controlled and conditioned by the social structure and this irony was elaborately discussed in this novel through the characters.